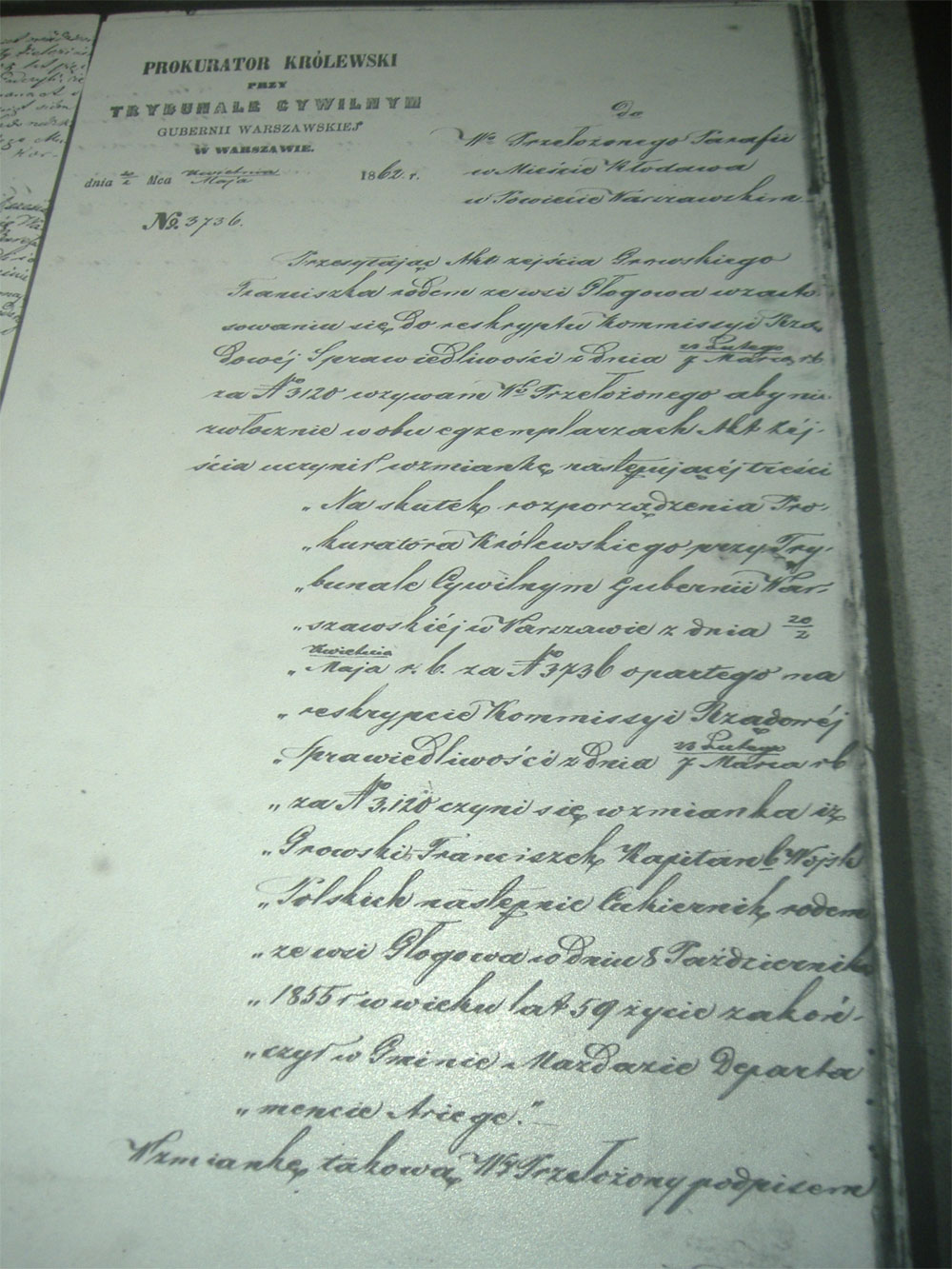 I was viewing a microfilm from Klodawa (near Kolo and Konin) (1862) when I
came across a different type of death records. Whereas all other records
were handwritten ones, a few of them had a printed head, where it reads:
Prokurator Krolewski
Przy Trybunalie Cywilnym
Gubernii Warszawskiej
w Warszawie
(the body of the record was handwritten)

Could these be records of inssurectionists who took part on the Risings?

Reply from Narodowa.pl, after deciphering:

I’ve decipher this document almost fully, this is not the record of the man
sentenced to death, this is just a official note, from the General
Prosecutor of the Russian Gubernia Warszawska, to the parish in Klodawa (the
place of his origin) to note in the parish/civil books about his death dd
Oct 8, 1855 (so before the Powstanie Styczniowe – January Uprising 1863/4).

But I will load it to Narodowa.pl, every piece of the history is worth to be
preserved for other searchers.

Prosecutor Krolewski
at
the Civil Tribunal of
the Warsaw Governorate
in Warsaw
on 20/2 April / May 1862
To: Parish Superior
in the city of Klodawa
in the Warsaw Poviat
No: 3736

By sending the deed of death of Growski (?)
Franciszek, a native of the village of Glogowa, in accordance with
the rescript of the Kommissyi of the Government
of Justice of February 20 / March 7 , in the case
of No. 3120, I call on the Superior to make
a mention of the following text:
“As a result of of the ordinance of the Prosecutor of the King of Poland at the Civil Tribunal of the Warsaw Governorate in Warsaw on April 20 / May 2 (current year) for No. 3736 based on the rescript of the Government Justice Kommissy and on February 22 / March 7 , for No. 3120 mention that Growski (?) Franciszek Captain of the Polish Army,

Notes Narodowa.pl: The surname Growski seems to be incorrect? In the Klodawa parish there are approximate names: Gorski, Graczyk, Gralak, Grabski, and

probably the correct Captain’s data are: Franciszek Grabski (?),
Coming from the village of Glogowa (Glogowa), the parish of Klodawa
(Klodawa) Mazowsze, Poland.