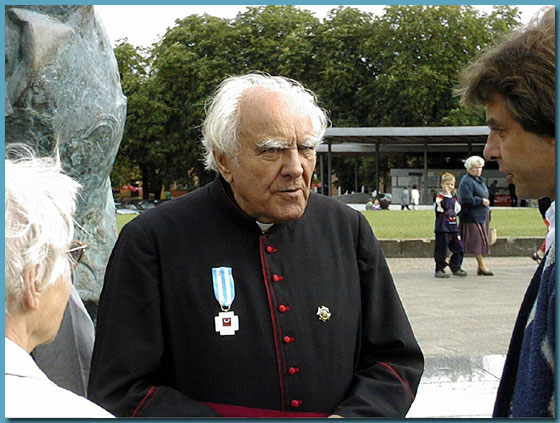 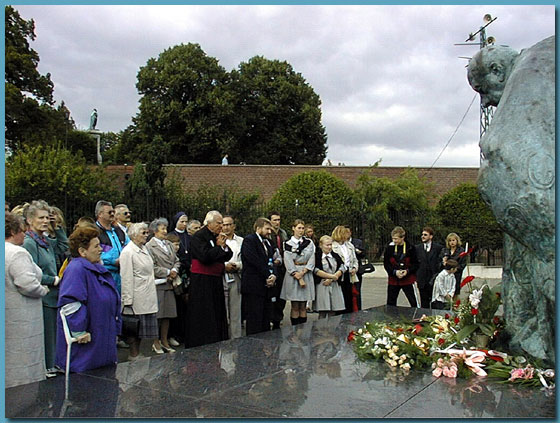 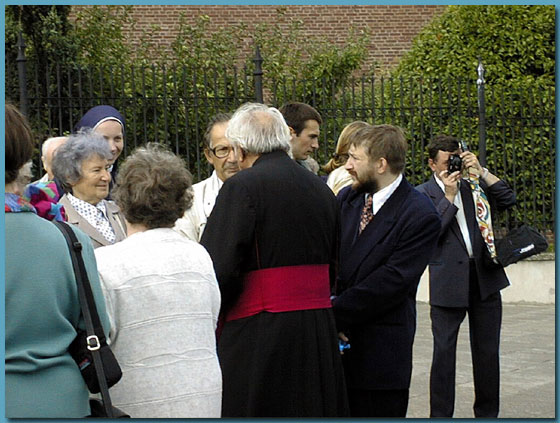 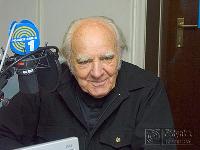 Undoubtedly, a historical figure is Monsignor Zdzisław Peszkowski, the chaplain of the Katyn Families. I met the priest prelate during the broadcast from Katyn in June 1995. Today I am sending you the text and the recording of the conversation in the “Signals of the Day” from February 10, 2005, and some photos from the 80th birthday celebration, which took place on August 24, 1998 at Jasna Góra Monastery.
Regards K. F.

PS If I find any more materials, I will certainly send it.

Today, 65 years have passed since the first deportation of Poles to the East

Jakub Urlich – Thousands of candles are to be lit today in Polish homes, because today it is 65 years since the first Poles were transported to the East.

The guest of Signals of the Day is priest prelate Zdzisław Peszkowski, chaplain of the Katyn families and those murdered in the East, a former prisoner of Kozielsk. Hello, Father. – to listen to this recording – click here

Fr. Zdzisław Peszkowski – I am very glad that I am.

JU – Apparently… well, not supposed to, we don’t remember much about this anniversary, the 65th anniversary of the first deportation of Poles to the East.

Fr. ZP – There is a strange thing here, I mean sick. And because it was forcibly done, this disease is even deeper in people. The truth is that on August 23, 1939, there was a secret Ribbentrop-Molotov pact in Moscow, that is, Stalin and Hitler. And it was actually an order and a decision that Poland would not exist at all. My nation, our homeland, was not supposed to exist at all. And only on February 22, 65 years ago in Zakopane, in the villa “Telimena and Tadeusz”, they sat down to the conference – they called it methodically – the NKVD and the Gestapo, and then they had to work out this furious, bandit, murderous plan against Poland. And in those six weeks they made a precise plan – Poland, my homeland, my nation was not supposed to exist on earth at all.

JU – How many Poles fell victim to deportation to the East?

Fr. ZP – Altogether, there were more than 1.5 million deported families. And the first blow was on February 10. And it was in the winter of the century, it was so furious, lightning frost and during that … Imagine how methodically everything was prepared – 110 freight trains, each with 70 cars, and each car crammed with fifty to a hundred people. And it was all prepared precisely, and in thousands of places there were sleighs and two boyfriends or some others with reprimands, and there were also some local people. And all of this was prepared precisely throughout this Polish land, just to move these thousands of families, completely, absolutely, so that no trace of them would be left.

JU – During this first wave of deportations, many families of Polish Army officers, policemen, state functionaries who were in the camps in Kozelsk, Ostashkov and Starobielsk, i.e. the elite, were deported deep into the USSR.

Fr. ZP – Elite, absolutely. And it was among them that they were especially hated, such as foresters, and later teachers, scout instructors or just anyone who was significant, that is, he was an enemy of the people and he had to be fired as far as possible. With no pity for their children, many mothers had babies of theirs at their breasts. And they also call this road, which was marked with thrown children, then all those old people, all who … And yet grandparents came to these households most often, because it was with the family, to be together, to be as close as possible during this war myself. And it all stayed … And the scariest part of it all was that when they got in there, they gave it fifteen minutes of time. First they walked in banging on the door between eleven o’clock at night, maybe ten o’clock in the morning until four in the morning. It was all prepared precisely, in a bandit way, just to grab everyone. And then when they entered, they said, among other things: “You will never come back here.”

JU – Indeed, most never came back.

Fr. ZP – She did not come back. One-third had already died on the way, and in those first days, because they were simply faced with a problem such that… They were not prepared for this in any way. So especially from the kids, I found out later when I was in India with them where… just what happened. (…) I remember that there is one woman who … I see her very often next to these carriages with these crosses, (…) I look, someone is always standing from this New Wilejka. I ask: Dear lady, why do you come here? Because here we were taken from this place. And then she tells that my mother had Terenia by her breast and after four days we had to take Terenia and throw Terenia somewhere in the snow. And, he says, I am still from this Nowa Wilejka district, I cannot imagine how it happened that they smashed our whole family into small pieces, and in a terrible way.

JU – Father, we couldn’t remember these events during the post-war years, we were not allowed to. But why do we forget about it now, in free Poland? Or at least we remember not as we should?

Fr. ZP – When I love my nation, sometimes I don’t know what is happening to us. Because at first many do not believe that this is true, many have put aside these issues of these four deportations as some invention of this crazy priest, and later some people. And sometimes someone cries and you don’t know what he means. And this is just a reminder at least a little. The truth is that each of this family who left, today each of these living people can put together a script for a movie that is hard to believe, how come they went through it all, then endured it. And when you look at all this terrible thing, just when I think about it, good God gave me that as the one rescued from Kozielsk, from Katyn, I can simply look at it calmly and demand that the truth be an enrichment for our memory. Because without this truth, this truth is so fantastic that … And in this there is such a huge effort of many, especially mothers, grandmothers … Such a famous priest Przydatek, who is in Rome, a Jesuit, wrote a book, or rather a book it’s about his grandmother, how she saved his life, how she could … So the powers of our women, our mothers are some fantastic stories that should be specially written down.

JU – The priest demands the truth about those events. The priest also suggests that today we should commemorate all those who were deported and who have already stayed there.

Fr. ZP – May we pay close attention to them and in this most sincere prayer. And most of all, the memory just to know that we were going to be completely destroyed. And such powers were, especially of women, of our mothers, grandmothers, were so fantastic that today it would be necessary to say: a teacher, some professor, someone else, and suddenly what a powerful woman, a mother.

JU – So we encourage every family that lost a loved one in Soviet camps to put out a candle in the window this evening. Candles are also to be lit in front of all monuments dedicated to the murdered and murdered in the East.

The guest of Signals of the Day was priest prelate Zdzisław Peszkowski, chaplain of the Katyn families and those murdered in the East, a former prisoner of Kozielsk. Thank you very much, Father, for visiting our studio on this sad and important day, an important day for our history.

Fr. ZP – I am extremely happy. And let these words of mine be primarily about the Golgotha ​​of the East, that is, about this bravery, about all these forces that have been released during the greatest trial that can be.

PS Thank you very much for placing this text in the GA.PA National Virtual Gallery