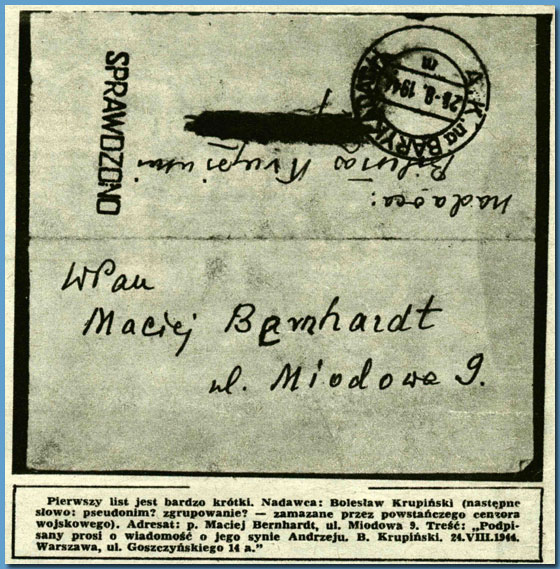 In the case of the theft of letters from the Insurgent Scout Post found next to the fallen scout.

One day in September 1973, in the Żołnierzy “Żywiciel” community, one of my colleagues informed me that in the dentist’s waiting room he had read in the weekly “Za Wolność i Lud”, an organ of the militia and security service, an article about the Scout Insurgent Field Mail, in which there is a mention of me. This surprised me a lot, because I was not a soldier of the Gray Ranks and I also had no contacts and acquaintances in the spheres whose organ was the aforementioned weekly.

Intrigued, I reached the number 31 (516) of August 4, 1973 of this letter. I found in it a mention of the Scout Insurgent Field Mail, the circumstances of finding the letters and, inter alia, a photograph of a letter addressed to me that I never received.

It was a letter from prof. Bronisław Krupiński, my colleague’s father and dear friend and comrade-in-arms – Andrzej Krupiński (pseudonym “Jacek”), soldier of the 237th Home Army platoon, 2nd company, “Serb” battalion (later renamed “Żubr”), “Żywiciel” District . Andrzej died on August 2 in the Boernerow massacre during the transition of our company from Żoliborz to the Kampinos Forest.

This letter, along with many others, was found on the body of a scout postman during the removal of rubble from Szpitalna Street. The author of the mentioned article writes, among others:

“After years, they became (the letters found – MB’s note) a kind of historical document, reflecting, at least in part, the realities and atmosphere of the days of the Warsaw Uprising. And at the same time – maybe they will find someone alive, maybe they will become a valuable trace for the addressees, senders, relatives or colleagues, maybe the last memento … “

After reading this text, I immediately called the magazine’s editorial office. The young (judging by his voice) editor who spoke to me was very nice and delighted that there was a response to the article. Apparently, I was the first and only one who contacted the editorial office, and it’s been at least 4 weeks since the issue was published. He invited me to the editorial office for a meeting with the author of the article.

However, the atmosphere of the meeting with the author (?) Of the article was completely different. I was welcomed by a middle-aged person with a classical U-bek physiognomy. After a polite greeting, at which he was not polite to introduce himself, he did not fail to emphasize that: he knows everything about my Home Army activity and about my cousin, an RAF airman, who flew three times with airdrops for the Uprising, and after being knocked down he was in the Home Army partisans and pretending to be he falsely returned to the West through the USSR for the fallen Canadian pilot.

After this introduction, he noticed that the letters from the insurgent post had great philatelic value today and he advised me not to pursue this matter further. “I think we understood each other? Well, goodbye, sir. ”

I do not remember when Szpitalna Street was cleared of rubble. Many years before the described conversation, anyway. None of the finders or holders (or rather the thieves) of the letters bothered to find the addressee or sender.

My surname is not one of those popular in Poland and as far as I know there is no (and in the described time it certainly did not exist) another Bernhardt named Maciej.

From autumn 1946 I live in Warsaw again, from 1955 I have a telephone and it was enough to use the telephone book to find me.

The sender of the letter was a world-famous coal mining specialist, full professor at the AGH University of Science and Technology, a member of the Polish Academy of Sciences, and the Chairman of the Mining Council in the rank of minister – prof. Bolesław Krupiński. After the war, he lived at the same address mentioned in the aforementioned letter !.

It took a great deal of bad will not to get to the sender or addressee of the letter, having the capabilities of the militia and the security service.

Finally, one more remark: Prof. Bolesław Krupiński died in 1972. The article was published a year later. Coincidence, or was the “Author” waiting for his death so that he could not find the truth? And he had great opportunities in this regard.

In the 1970s, and then on the 50th anniversary of the Uprising, I tried to interest the editors of various magazines. Not only did neither of them post my letter, but even found it appropriate to reply that they were not interested in the subject.

A few years ago my short mention was published by the daily (unfortunately with a small circulation) “Głos”. I think this matter is worth recalling; it is not only about the appropriation of someone else’s property, but also about extreme cynicism, hypocrisy and hypocrisy …

Contemporary readers should be reminded here that all the rubble removal actions were always carried out under the watchful care of the “competent” authorities, who carefully “secured” all the materials found. Many of them, thanks to such “protection”, died forever, and some of them, which, apart from their historical value, also found their market value, for example, in the collections of the appropriate “philatelists”.