Mother’s memory of Radońska’s great-grandmother, i.e. a short history of a Polish family 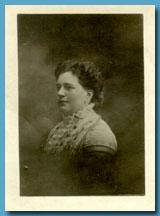 Grandma was stout, her legs were bad, and she walked slowly with a cane. But she wasn’t a grandmother, she had nothing to do with grandma. Grannies are small, bent. She was a type of Polish matron, without a false gesture. She really was.
A portrait of her father, with a long black beard, hung in the dining room. He was an insurgent in 63. He was sent to Siberia.
The wife, the beautiful, slender great-grandmother in the portrait, left the children to her mother and followed her husband.
Being in poor health, she died of consumption.
Grandma said that my father never laughed when he returned from exile. He always wore the shawl his wife wore in Siberia.
This story excited my childish imagination. I couldn’t comprehend that my own, so well-known, beloved Grandma, rubbed so closely against a story that I only knew from books.
It had a big influence on my attitude towards her.
It was childish, but very deep.
Grandma wore long dresses, and her dark hair, which was only slightly gray despite its age, was tied in a knot.
With all this, she was so simple, so kind.
Her truthfulness was famous, and no one dared to exaggerate in the slightest, let alone lie.
I remember today when she “poured out” the truth into her self-confident nephew when he was boasting about some snobbish “connection”.
“You didn’t see him somehow,” she said in the general silence, “when he didn’t mean so much.”

It was hard to impress her.
She had a big heart and a clear, simple mind that could not stand delusions. She loved us very much and among the old yellowed photographs there were many of ours, signed with her high, monastic letter “Masia and Witold”.
I often went with her to the grave of my grandfather, who died before we were born. They said they loved each other very much, and when she sat on the bench next to the grave, I didn’t know if she was praying or missing or talking to him. It wasn’t some “grave walking”, it was a visit. She was also able to laugh honestly and heartily, and on her fair face then bloomed almost maidenly blushes.

She read a lot and when it was difficult for her to walk, she said with great serenity: “The most important thing is that I have you with me and that I can see you all. And I can read it is the greatest joy of old age. Perhaps the greatest disability is blindness. ” Fate did not spare her either.

During the occupation, when we were thrown to Warsaw, she lost her sight.
Unable to go down to the basement quickly during the air raids, and not wanting to expose anyone, she demanded that it be placed near Warsaw. We drove there to visit her.
She always greeted me with such joy. She said – “How pretty you look! I can see it for real. ” And I know she saw it because she loved me very much.

On the news of the outbreak of the Uprising, despairing about us and the fate of matters which she could not talk about, but which she taught us to love, she suddenly died of a heart condition.
This news reached us after the Uprising, and although I managed to deal with the death of young and full of life people, this death shocked me, I felt its loneliness.
She’s gone. A man whom I loved very much when I was a child and to whom I was not allowed to give anything but love.