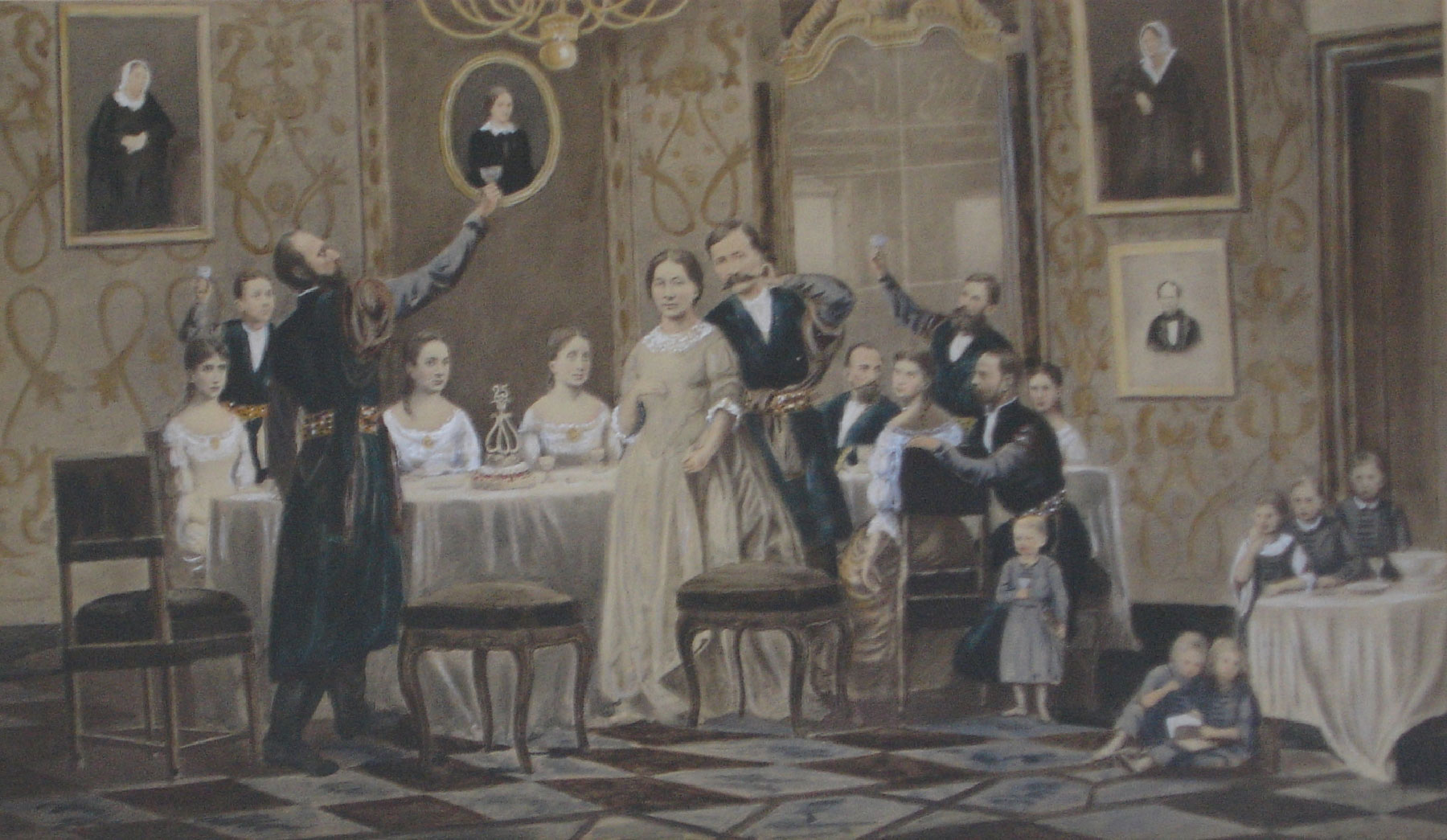 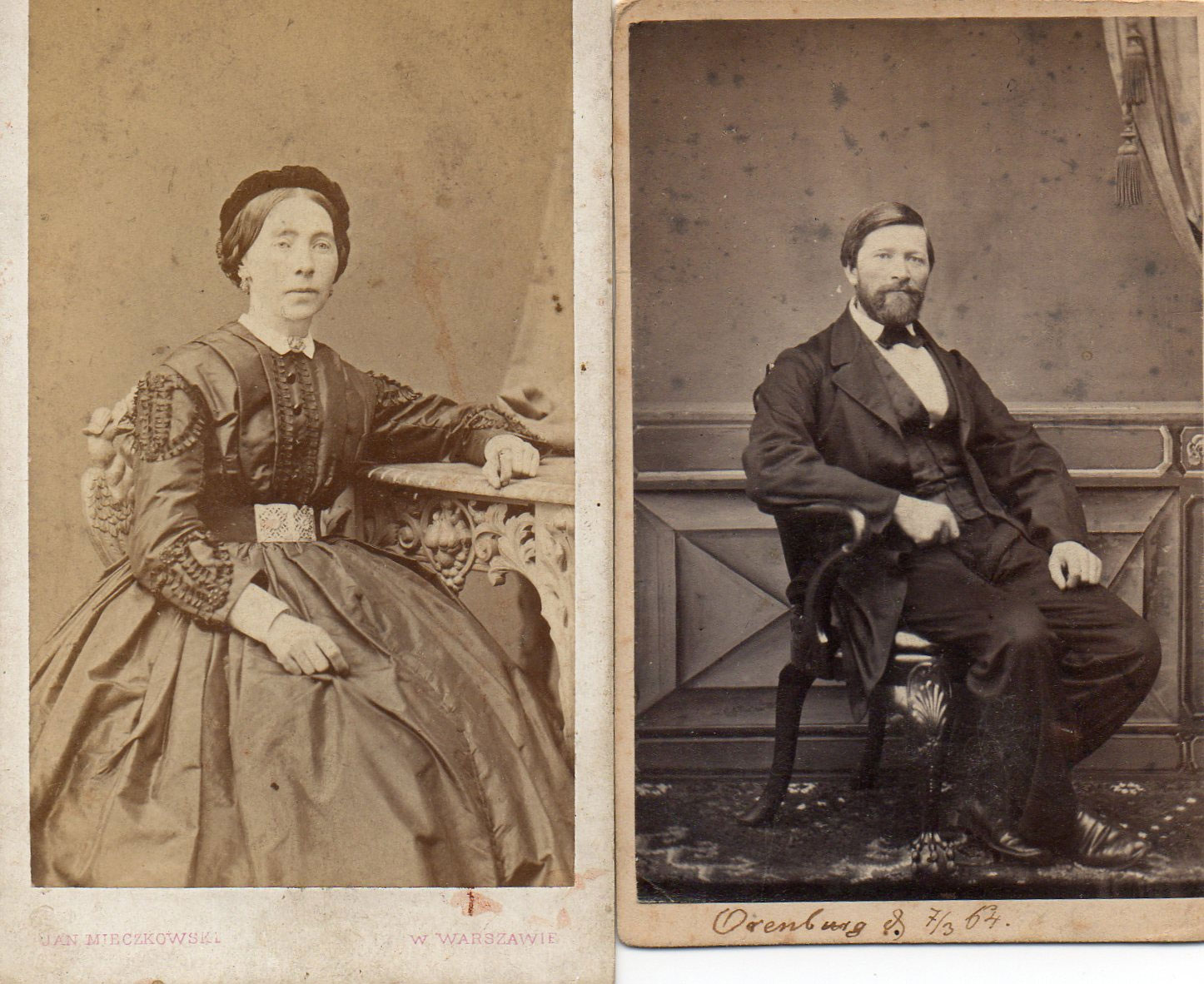 This is a painting of the 25th wedding anniversary of Josef Bruno Karpinski and Mary Smigielska in 1885, probably in Warsaw. Josef and Mary are standing in the center. Josef was a prominent lawyer in Warsaw. He and Mary lived until after 1900.

Josef’s first wife, Lucyna Smigielska was Mary’s sister; her picture is at the top center. Josef and Lucyna had five children, Carl, Ludwik, Henry, Kazmiera, and Mary. Henry is raising the toast in the right rear, and his brothers are the men seated in front of him. The woman between them is thought to be Kazmiera, while the woman at the back is Marie Engesser, Henry’s wife, who was from Alsace. Henry and Marie’s sons are seated on the floor at the right. The other children are thought to belong to Henry’s brothers.

Mary had one son, Julian Appel, from her first marriage. He is standing in the foreground. Julian and the man in the painting at the right have very similar features, so this might be a painting of Mary’s first husband, or
of Mary and Lucyna’s father. The woman above him is probably Mother Smigielska. That suggests that the painting at the left is of Josef’s mother.

Mary and Josef had three sons and a daughter, but only Stanislaus lived to adulthood. He would be the young man at the left rear. The three seated women are unknown.

Henry Karpinski emigrated to the USA in 1882 and has many descendants there.

A note in Polish (GA.PA gallery):
A family, priceless national souvenir sent from the USA – a photograph from the 19th century (1885), on the occasion of the 25th wedding anniversary: ​​Józef Bruno Karpiński and Maria Śmigielska, place: probably Warsaw. Józef Karpiński was a well-known lawyer in Warsaw, the first wife of Jozef was Lucyna Śmigielska, Maria’s sister, her figure is at the center of photography. Józef and Lucyna had five children (given in Mianownik for search engines): Karol, Ludwik, Henryk, Kazimiera and Maria (some in this photo), also Maria’s family from her first marriage. Maria and Józef Karpiński had three sons and a daughter, but only the son, Stanisław, lived to adulthood. Henryk Karpiński, the young man in the photo making a toast, left for the USA in 1882 (for the first time?), Where many descendants were brought up there.
—

Just a symbolic fragment of the life of Poles in the nineteenth century, their history, their emigration, stimulating the imagination, we hope that this family heirloom from the USA will also help in finding families in Poland, and in combining family history and family roots.

Thank you to P. James Newman for sharing this family memento with all of us!

I wrote a comment some time ago about the painting and photos of the Karpinski family, because it is also my family. However, I am not sure if my e-mail was delivered.

We did not know the picture in the family, because it may have already been created in the USA, and it is a bit fantastic and wrongly described, but I have always seen photographs at home. We have many of them, because the photo albums of my great-grandfather, Julian Appel, as well as his memoirs and letters to his mother and uncle-stepfather, Józef Karpinski, have been preserved. Maria Karpinska and Józef’s first wife, Lucyna, de domo Smigielskie, were sisters, and after Lucyna’s death, Maria, already a widow, married her brother-in-law to raise all the children together).

I don’t know if Mr. Jim Newman might be interested in contacting his family in Poland or Spain, or at least in the information we have.

I enclose the assembly of the “family tree”, which also includes the then deceased first spouses of Józef and Maria (i.e. Józef Appel and Lucyna) and all the children, including one joint and photographs of Lucyna and Józef Karpinski (Józef in exile in Orenburg in 1864 )

Your message is EXCITING! We had no idea that any other branch of the
family had survived! We are delighted to hear from our cousins!

Henry Karpinski is my wife’s immigrant ancestor. He was a prolific and

interesting writer, who lived for a time in several European cities
before he came to America about 1882. He saved the best of his
letters, and I am working on making them into a book that will be
published online. Unfortunately, he was not interested in bringing his
Polish culture or family relics with him, so his children Americanized
right away. They kept his interest in languages and education, but he
was the only family member to have contact with Poland. Henry’s last
contact was not long before he died in the 1930’s. His sister was
still alive but very elderly.

My wife and I visited Poland – Gliwice and Krakow – for 2 weeks
several years ago. We did not have much chance to plan ahead, so we
were not prepared to search for family members or places.

Please do give me Irena Ochlewska’s email address!

And thank you for your help!!!