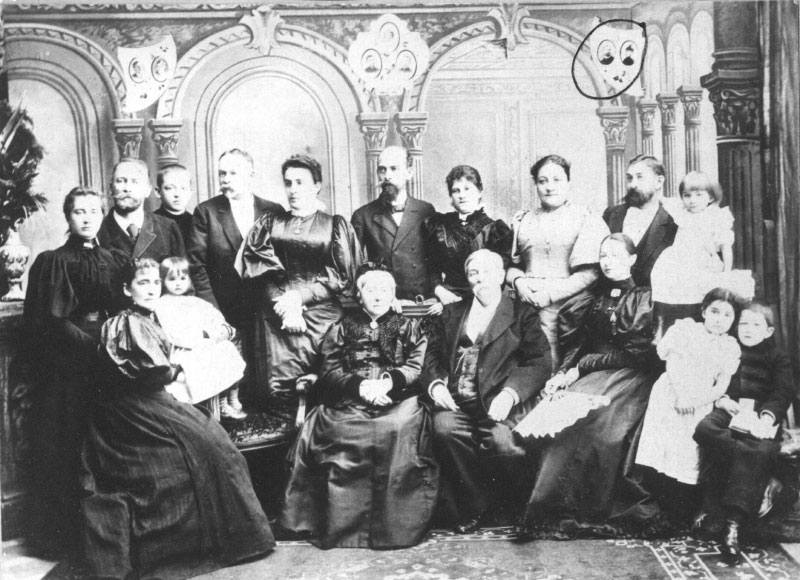 This photo was taken about 1900. The couple in the front center are Josef Karpinski and his wife Mary Smigielska. (Josef died the next year.)

The cameo photographs in the upper left are Henry Karpinski, Josef’s son by his first marriage, and his family who lived in Oswego, New York, USA. The other cameos are probably other absent family members.

Standing in the center is Julian Appel, Mary’s son by her first marriage. the woman to his left is probably his wife.

The two men standing at the left are Carl and Ludwik Karpinski, Henry’s brothers. The man standing at the right is probably Stanislaus, son of Mary and Josef. The women with them are probably their wives. The two seated women mught be Mary and Kazmiera, Henry’s sisters.

And the second family memento, preserved by P. Jim and his family in the USA, in this family photo from around 1900: Józef Karpiński, a well-known lawyer from Warsaw, and his wife Maria Śmigielska (Józef died a year later) with his family, on the left the last page: Henryk Karpiński, son of Józef Karpiński from his first marriage to his sister Maria Śmigielska, and his family living in Oswego, New York, USA. Their names and surnames are given in the text above.

Once again, we would like to express our sincere thanks to P. James from the USA for sharing his family souvenirs with all of us in Poland and the USA.