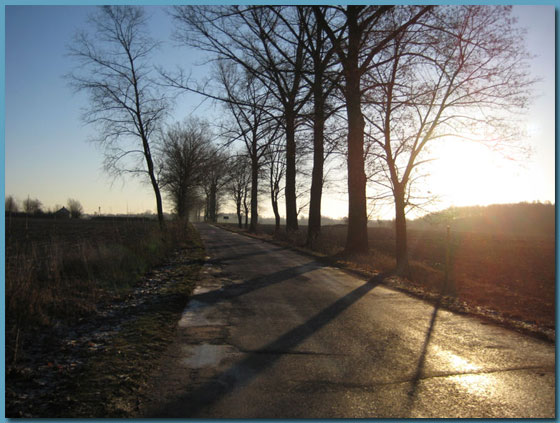 I hope you had a great New Year’s!

Sorry for the delay. Holidays, family, having to work on the weekends, etc. Following is the relevant excerpt from my travelogue, for your exhibit page. I have attached a picture as well:

The following is an excerpt from my travelogue, “Everybody’s Related to Aliens,” describing the discovery of my Polish roots. For the full story, please see http://blogs.bootsnall.com/RTree/.

My genealogical research could go on forever, though presumably the discoveries would be fewer and farther between with time. But tomorrow, I will finally look for something a little more tangible than a record on paper. I will visit the tiny village which my great grandfather left behind some 100 years ago, and where today there is still a family by the same name. Maybe they’ll run. Maybe they’ll bring out a bottle of vodka. Maybe they’ll take all my belongings and tell me to go back to America. There’s only one way to know.

Any time my alarm clock goes off at some ungodly hour when it is still dark, the first thing that comes to my mind is “what the hell was I thinking?” The same was true this day, only doubly so, because I was wandering off to an unknown village in the middle of a foreign country where I had little reason to expect anything more than frustrating miscommunication. But this was to be the culmination of months of family history research and a few weeks of Polish study, and at the very least I wanted to come back with a story.

The beginning of the trip was ominous. I waited at the freezing bus station for half an hour in the dark, wondering if I misunderstood the instructions for where to wait for my bus. But then the bus rolled in, late as it was, and I was on my way to Starozreby. It was only then that I decided to look at my map, and noticed that my destination was some 7 miles from Starozreby, and I would have to walk there. This was something I decided to do weeks ago, when it was still pretty nice outside. When I got to the Starozreby station, which turned out to be little more than a concrete shelter, things seemed even more ominous. I double and triple checked the bus timetables to ensure I could in fact get back and not end up like the frosted plastic water bottles littering the side of the road. And then, my first steps through town were accompanied by a chorus of barking dogs.

The walk was beautiful; the sun was rising and a faint mist was rising from the icy road in the midst of pure farm country. Because there are few roads and many signs, I had little trouble finding my way to the village. Just as I had arrived in this tiny village, I walked by a woman with a shopping bag. “Do you know where this family lives?” “Yes, second house” Now that’s the kind of Polish communication I can handle.

I walked in front of this second house, which was a gated home with a vast farm for a backyard. I waited in front of the gate until the chorus of barking dogs and clucking chickens reached a crescendo. This is the rural Polish equivalent of a “doorbell.” Just then, an elderly but agile man shuffled out of a barn, yelling something I didn’t understand. I mentioned something about being a relative, and he said, yes, they had received a letter from me a week ago, and he directed me inside their home. Inside was an elderly woman, a bit younger and more agile. Above a coal-powered stove was a pot with two chicken feet sticking out.

Neither spoke a word of English, but apparently, they understood my letter, which my Polish teacher in Krakow had helped me to write in perfect Polish grammar. I shared with them my latest research, and the two of them began throwing out Polish dates and years as if they were brainstorming a connection. Yes, their relative Józef must be my great grandfather Ignacy’s brother. But, I wasn’t clear how, and couldn’t even figure out if my two hosts were married to each other or were brother and sister. Why was the woman’s phone number the one in the phone book? As we attempted communication, the matriarch insisted that I have some herbata (tea), some bread and bacon, another herbata, an apple, and a bowl of soup. And then some chocolate crackers. And then another apple (good for teeth!). And then another herbata and a donut.

There was some intermittent success with communication. And there was a whole lot more confusion. The matriarch was remarkably patient and seemingly very sharp. She insisted that I take my time and write my questions and comments in Polish, using my English dictionary. The man of the house seemed to be yelling at me the whole time, but I felt better when he explained that he was just hard of hearing. He was a farmer, grew potatoes and rye, and kept bees (i think)- different enough from me that I’d be proud to be related to him.

But it turned out I’m not related to him.

Just then, a much younger women came in the house. This was their granddaughter, my third cousin, apparently. And then later two more- a man with a mustache and a woman a bit older than me, and later a teenage boy. I was hopelessly confused after the initial introductions. However, although no one spoke a word of English, their daughter had a remarkable ability to communicate simply and clearly, which transcended language barriers. So this elderly couple were not my relatives, after all, they were live-in in-laws of my relatives! In the end it turns out I was directly to three of the other four. Two third cousins, and a third uncle. Now that’s cleared up-almost. I don’t have a birth record proving Ignacy and Jozef were brothers, but the village was too small for us not to be related.

I shared with them a motley collection of gifts – a bar of chocolate, a Chicago shot glass (to represent at home), and a Boston Red Sox hat (to represent my birth). And, I promised that if they came to Chicago I would make them drink five herbatas to get them back. They told me they wanted me to write again, and that next time I should visit them in the summer. Success?

My last day in Plock, I returned to the state archives one last time, looking for absolute evidence that I was in fact related to the strangers from Piaczyn. The archivist seemed happy to see me back and tried to shake my hand, but I had misread and thought he was reaching for my pen. I ended up stabbing him in the hand with my pen. Such miscommunications transcend all language.

Sifting through the parish birth records one last time, I found another kind of miscommunication, this one over a century old. My great grandfather did have a brother Józef after all- his name had been misspelled in Cyrillic. So we were related, after all.