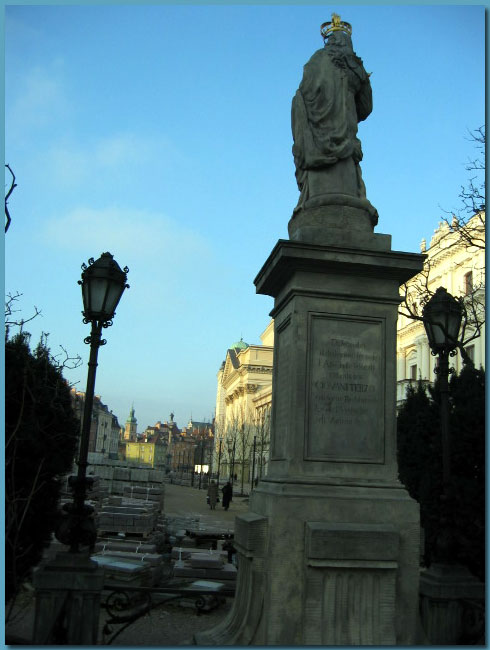 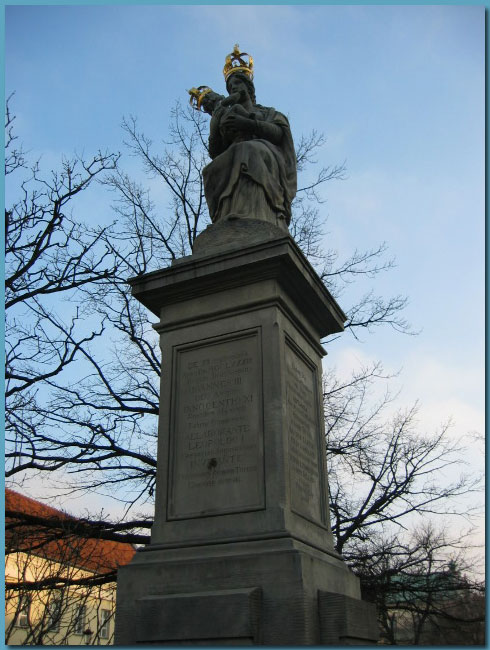 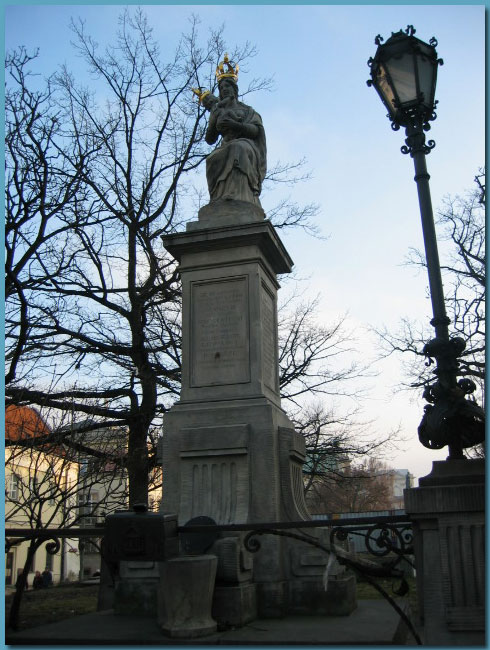 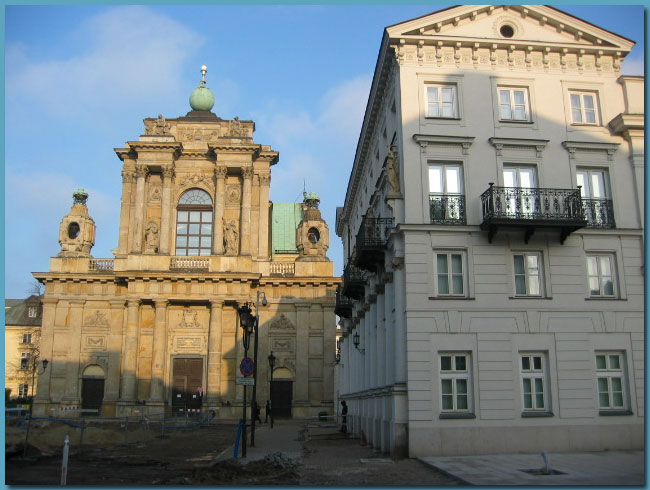 Wherever we wander in Poland or in the world, we find stone souvenirs everywhere, be they roadside crosses and figures, or cemetery monuments. Since the dawn of time, man has used the stone to proclaim the glory of his dynasty (e.g. pyramids), his family (e.g. stone circles, monuments) for centuries, or they were given by the family in gratitude for good fate (e.g. roadside thanksgiving figures) .

It is our best knowledge and culture, our human imagination, to see them on our journeys, to write down their history, to keep their memory for us and for our next generations. There is nothing more precious in our rich life than the memory of past generations. Whoever does not know the past of his family and his nation is like a tree with its roots cut off, which will never grow back, will disappear in the depths of history.

There have been numerous local stonework centers for centuries in Poland. One of such centers is Kunów on the Kamienna River. The very name of the river speaks of the local wealth – the sandstone deposits found here gave rise to a centuries-old, extremely interesting stonework culture. It can be assumed that initially, at the time of the establishment of the Polish state and earlier, elements of building stone, millstones and similar elements of farm equipment were made here. Over the years and the following centuries, local stonemasons became craftsmen and artists, creating monuments, cemetery and roadside figures, elements of construction and decorations of many palaces, churches, bridges and streets. Based on the “Biographical List of Stonemasons and Sculptors from Kunów nad Kamienna” by Krzysztof Wojciech Fornalski, made mainly on the basis of A. Bastrzykowski and his “Historical Monograph on Kunów nad Kamienna” (Krakow 1939), supplemented by Church records from Kunów, publications of the Society of Friends of the Kunów Region and other sources, including private ones, collected from families from Kunów, we can try to briefly describe the history of the remarkable achievements of masonry in Kunów:

Kunów on the Kamienna River has been famous for centuries for its “Kunowski sandstone”, from which many monuments and monuments of Polish and European culture were created. The oldest recorded historical memento is the figure of a Pilgrim in Nowa Słupia, located in a forest about 5 kilometers from Kunów, funded in 1430 (i.e. 20 years after the Battle of Grunwald!) By the bishop of Oleśnica. King Zygmunt the Old, Stanisław August Poniatowski and Tsar Piotr I used to visit Kunów for the famous Kunów stone. (it was built in 1644), so it is after that column the oldest monument in Warsaw! (see attached photos – performed by T. Wysocki with family / Warsaw).

“Matka Boża Passowska” was a votive offering carved by the famous architect Józef Belotti (architect of the Basilica of the Holy Cross in Warsaw (1679-96), numerous churches in Poland, stucco work at the Wilanów Palace, etc.), funded by him for saving Warsaw from the plague and The Viennese victory of Jan III Sobieski in the same year 1683. Another famous architectural element made of Kunowski stone is the facade of the Discalced Carmelite Church located also on the royal route (Krakowskie Przedmieście) in Warsaw (see attached photos – performed by T. Wysocki with his family / Warsaw ).

But let’s try to go as deep as possible into the history and names. As can be seen from the above information, local stone masons from Kunów made roadside figures as early as the 15th century. The author of the figure Pilgrim from Nowa Słupia from 1430 is unknown. However, we know from the given Biographical List the specific names of Kunów stonemasons already in the 17th century. They were craftsmen and settlers mainly of German and Italian origin (the names Achim (Achym), Albuti, Bay, Braun, Burman, Delinger, Egiel (Hegiel), Gering, Grayff, Hegl, Krantz, Krauze, Miller, Najnobel, Oberkolner, Otto, Primmer, Plersch, Rethler, Schot, Schteinlechner, Schultz, Tedescho and Waykert). The attached list also gives many names of local Kuna masons from the 18th and 19th centuries (Awelka coming from Moravia in Bohemia, Bartkowicz, Bartkowski, Cichosz, Cierluk, Czerwiński, Dankowski, Duchnowski, Epstein, Fornalski, Gratkowski, Gołębiowski, Hagen, Kaftal, Kempiński, Kłosiński, Konarski, Kotkowski, Kubicki, Lesik, Majchrowski, Piwnik, Rola, Rospaliński, Sułkowski, Swoboda, Szczurkiewicz, Szruba, Szumliński, Wilczyński and Wysocki).

We should also mention the famous Polish painter and architect Wojciech Gerson (1831-1901), professor of fine arts in Warsaw, co-founder of the Society for the Encouragement of Fine Arts, who designed the church belfry in Kunów built in 1896, and whose daughter Maria Gersonówna was the most famous woman in the field of sculpture – in Kunów at the turn of the 19th and 20th centuries she carved, among others, in the church of the Nativity in Kunów, under the altar of Our Lady of the Rosary.

The masons from Kunów provided many elements for the construction and decoration of churches, palaces, manors and bridges of former Poland. Many of them have not survived to this day, such as the elements of the stonemasonry of the Kierbedź Bridge in Warsaw (1859-1864) made and supplied by stonemasons-artists, brothers Józef and Julian Wysocki from Kunów. The master of masonry from Kunów, Kazimierz Kubicki, provided carved stone elements for the construction of the National Theater (1829-1830), the Kunów stonemason Saul Kaftal provided stone elements for the construction of the Modlin and Dęblin fortresses (1838) and the locks on Kamienna, brothers Józef and Julian Wysocki made sculptures and monuments for cemeteries in Warsaw and in St. Petersburg, their father Ignacy Wysocki (who was forced to leave his native Wysock … (?) in the eastern borderlands as a punishment for his family’s participation in the Napoleonic wars), moved to the Wysocki family in Kunów (around 1855?) and launched more quarries here, he sent the exploited sandstone with his sons Józef and Julian, including Translation results to Warsaw, carved decorative elements for churches and tombstones – monuments to order This family is also proud of Ignacy’s great-grandfather’s brother (cousin): it is Czesław (Jordan) Wysocki, b. according to encyclopedias in 1839 – but my genealogical research indicated 1837, probably in Pińczów or in the vicinity he was a geographer educated in Kielce, he was also an officer fighting in the January Uprising in 1863-4 – after the defeat of the Uprising he was forced by the authorities tsarist to emigrate, he left for Paris in 1864, and then, according to family notes, he settled (in 1867) in Argentina, Jordan Czeslaw Wysocki, the founder of the foundations of Argentine cartography, including military, geographer, traveler, and garden creator, died in 1883 as a 44-year-old well-known Argentine citizen, Jordan Czeslaw Wysocki. Carlos Alberto Passalacqua, former Argentine ambassador to Poland, also wrote about it: “In Argentina, lovers visit the Palermo Park in Buenos Aires, especially its part called Rosedal – the rose garden. The alleys among the flower beds are the perfect place for a walk for two. Interestingly, this place was co-designed by a Pole, an emigrant after the January Uprising, Colonel Czeslaw Jordan Wysocki ”.

Local artists – stonemasons made many elements of the interior design of many palaces and churches in Poland, including for the local church in Kunów. It is worth noting, at least partially, the inventory of the church in Kunów, many places tell about the enormously rich history of the parish, town and local stonework. The nativity play at the altar of Our Lady of the Rosary, made by the most famous sculptor from Kunów, the daughter of the famous painter Wojciech Gerson, has already been mentioned. But even more valuable are, for example: the altar of the Transfiguration of the Lord from 1850, designed by Franciszek Kacper Fornalski, made by Jan Wilczynski, figures of the holy bishops Wojciech and Stanisław in the presbytery made by Antoni Kłosiński in 1867 (founder by Katarzyna Sadkowska), the church floor funded by Kunowski stonemason Ignacy Kotkowski (19th century), many other elements in the church (see the website of the parish http://www.kunow.net.pl/ ), and equally valuable monuments at the local cemetery in Kunów It is worth mentioning here many unusual monuments – tombstones, incl. about the tombstone of Franciszek Fornalski (1863 – January Uprising).

Finally, in the town of Kunów itself you can find monuments of the past, in the old market square a monument in honor of the five fallen in Warsaw made by the Kunów sculptor Antoni Kłosiński (1862), and many local sculptures and chapels, including a chapel in the northern part of Kunów: “Grandfather Józef Wysocki Wishing to honor the memory of his equally beloved first wife, Elżbieta, he erected a monument in Kunów (around 1915), which stands there to this day ”.

The tradition of stonework in Kunów has survived, it is worth continuing this story in the present day, here I invite the inhabitants of Kunów to describe the current state.

Dear guest reading this text, if the paths of your life and travel come into contact with Kunów on the Kamienna River, stop here for a moment, visit these interesting places, the market, church, cemetery, surroundings, touch these places and historical monuments with your imagination, visit and see this little valley with great history.

From this rich history and past, all of us with the best values ​​of our lives.

Tadeusz Tad Wysocki with his family