Literary Souvenir – An unknown small story by an unknown author, “A modern waiter” 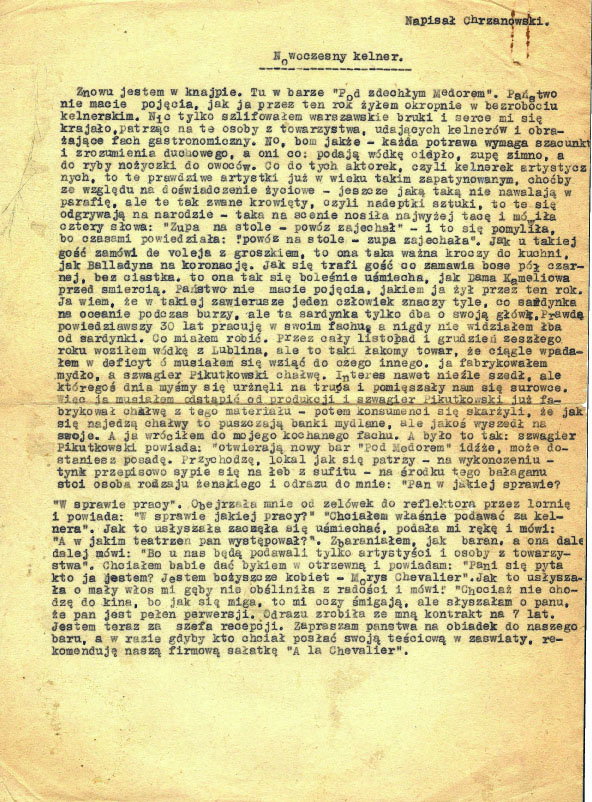 An unknown occupation story by
an unknown author “Modern waiter”

Typescript found in the collection of our aunt: Eugenia Maternicka (1875-1967) head of the secretariat at the pre-war Gebethner and Wolff publishing house, Warsaw. Maybe experts will help to guess the author whether Chrzanowski is an authentic surname or a pseudonym – if so, whose? We provide an excerpt from the attached typewritten scan:

I’m in the pub again. Here at the “Pod zdechnych Medorem” bar. You have no idea how I lived a terrible life in waiter unemployment this year.

I was just polishing the pavements of Warsaw and my heart was cut to the point of looking at these people from society, pretending to be waiters and offending the gastronomic profession.

Well, how – each dish requires respect and spiritual understanding, and they do what: they serve vodka warm, soup cold, and scissors for fruit for the fish.

As for these actresses, that is, artistic waitresses , these real artists already in such a patina age, if only because of their life experience – they do not yet break into a parish, but the so-called they play on the nation – one on stage carried a tray at most and said four words: “The soup is on the table – the carriage has arrived” – and she was wrong, because sometimes she said: “the carriage is on the table – the soup has arrived”.

When such a guest orders de voleja with peas, she is as important to the kitchen as Balladyna for the coronation.

When you get a guest who orders a barefoot half black woman without a cookie, she smiles as painfully as the Lady of Camellias before her death. You have no idea how I lived this year.

I know that in such a turmoil, one man is as much as a sardine in the ocean during a storm, but this sardine only cares for its head.
In fact , I’ve been working in my profession for 30 years, and I’ve never seen a head from sardines. What was I supposed to do.

Throughout November and December last year, I was carrying vodka from Lublin, but it is such a tasty commodity that I was still running into a deficit and I had to do something else.

I made soap and my brother-in-law Pikutowski made halva. The business was going well, but one day we got dead and we got confused about the raw materials.

So I had to quit production and my brother-in-law Pikutowski already manufactured halva from this material – then consumers complained that if they had enough of halva, they would release soap bubbles, but somehow he got his own way.

And I returned to my beloved profession. nd it was like this: brother-in-law Pikutowski says: “they are opening a new bar” Pod Medorem “, go, maybe you will become a job.

I come, the place as you look – on the finish – the plaster falls on the head from the ceiling according to the rules – in the middle of this mess there is a female person and immediately to me: what about you?

“On the job”. She looked at me from the soles to the headlight through the lornia and says, “What job?” “I just wanted to pass for a waiter .” When she heard it, she began to smile, shook my hand and said:

“And what theater did you perform in?”. I was stunned like a ram, and she goes on to say: “Because we will only serve artists and people from our company ”. I wanted to give my woman a bull in the peritoneum and say: “You ask who am I? I am the idol of women – Morys Chevalier ”.

As she heard it, my mouth almost drooled with joy and says: “Although I do n’t go to the cinema, because when it flashes, my eyes flicker, but I heard about you that you are full of perversion.

She immediately made a contract with me for 7 years. I’m in charge of the receptionist now. I invite you to lunch at our bar, and in case someone wants to send their mother-in-law to the afterlife, I recommend our company salad “A la Chevalier”.