Historical memorial from the USA “The monument of Haller Army” – Monument dedicated to the participation of Americans in the Army of Haller, Poland 1918 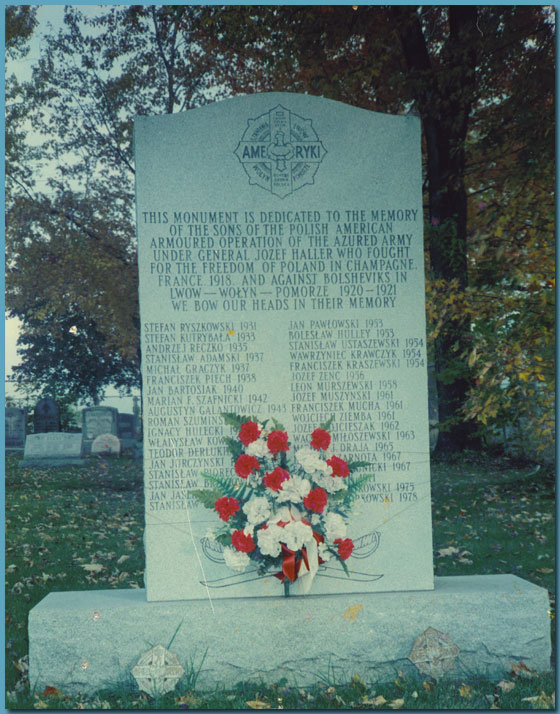 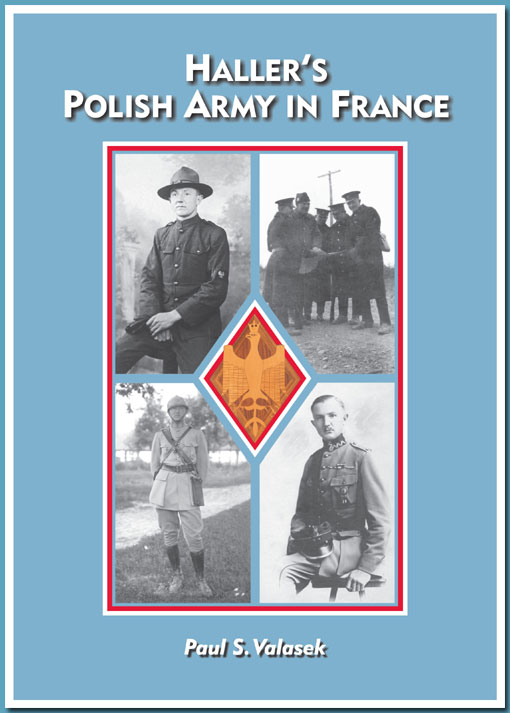 It is in St. Stanislaus Roman Catholic Cemetery, in Cheektowaga, NY. There
is about 36 names of men who fought under General Jozef Haller.

From WebGallery Narodowa.pl ; here is the list of these Haller Army
soldiers, we have tried to decipher, each of this person, and his brave and
amazing life deserves our memory and tribute:

Saw your 2 recent postings on Armia Hallera and find them both of interest. The monument in Cheektowaga, NY I have not seen before. Will have to make a stop.

As for the fund raising poster, these came with indeed, varied amounts of donations, starting with $1.00 up to I believe $100.00 They were sponsored by the National Committee, Wydzial Narodowy.

The picture is portraying the death of the first casualty, Lt. Lucjan Chwalkowski in France in July 1918. He was reportedly to have said, “This is for Poland!” immediately before he died.

I don’t know if you have seen any information on my new book, but I will send it to you for further information.

Info in Polish (GA.PA National web gallery): The author of a priceless book from the USA wrote to us about (published in internet search engines): POLISH HALLER ARMY in France, The Blue Army, a book written for the first time on this subject, a lot of information and unknown documents , author: Paul S. Valasek, published in 2006, In this case, due to the very high historical value for the national heritage of Poland and the USA, we provide full address details, Welcome !:

For the first time in English, a history of the Polish Army in France, aka Haller’s Army, aka the Blue Army, aka Armia Hallera, is compiled from regimental histories, memoirs, period reports, letters and documents. Starting with the origins of the Restoration of Poland movement and the major roles of the city of Pittsburgh and the Polish Falcons, through the view of Ignacy Paderewski as he officially sat at the Paris peace talks; this book explains the formation, development, and accomplishments of this fighting force of Polish volunteers from America. They enlisted to travel to France for battle against the Imperial German and Austro-Hungarian armies on the western front, and subsequently to fight against the wave of Communism and the Bolshevik menace in the Polish-Soviet War of 1919-1920. Many of these resources have not been published in over 75 years and many are here for the first time in English.

Included in the book are:
w Regimental histories written less than 10 years after the war
w Memoirs of two of the army’s most active officers
w Reports by the Canadian Army at Niagara on the Lake as well as the reaction of local residents to the influx of so many foreign troops

w Accounts of the rapport which existed between the Polish Army in France and the YMCA
w Biography of General Haller as presented at a banquet honoring him in Wilkes- Barre in 1934
w 75 photos, 6 maps and a flowchart of the development of the army
w Over 1600 names of recruits from the Pittsburgh/ SW Pennsylvania region
w 715 names of casualties in France and the Eastern Front
w 161 names of Virtuti Militari award recipients
w 277 place names involved with battles on the Eastern Front
w 21 page index of Proper Names and Terms
w 432 pages, soft-cover, 7 x 10, perfect bound. ISBN 0-977-9757-0-3

Postage/ Handling for the USA

Send check or money order to:

For foreign orders, please contact the author. If you have any questions, feel free to email.

All sales final. Only manufactured defective books will be exchanged.