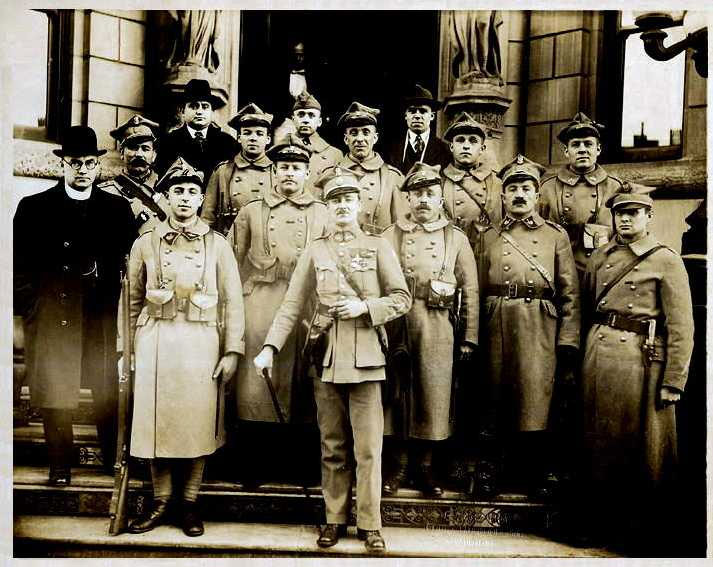 Hello Tadeusz,
Tina Ellis gave me your email address, and she suggested I write to you.
I have an old photograph of a group of 15 men, most in military uniforms. They are standing on the steps of what appears to be either a church or a court house. The photograph has a cardboard backing that bears the label, Columbia Square Studio, Cambridge, Massachusetts. Embossed on the photo itself is the name, J. Szczuka, 1056 Cambridge St., Cambridge, Massachusetts. I presume he was the photographer.
One of my relatives had labeled the bottom of the picture, “Frank Mulak, John Mulak’s half brother, with the Polish Army.” (John Mulak was my grandfather.) I found the name Franciszek Mulak in the index for Haller’s Army, so I think this may be a photo of a group of Haller’s Army veterans.
I have another picture of Frank Mulak, so I believe I know which one he is in this group picture. Frank is the young-looking man who is standing one step
below, and to our right of the man in black who is directly below the statue
in the upper left of the picture. (If Frank fell backward, he would fall
against the left shoulder of the upper-left man in black.)
Please, would you be willing to post this photo on your website? Perhaps someone who sees it may have a copy of the same picture. I would like to know for certain if these were Haller’s Army members, and I would like to identify all of the men in the photo.
Thank you very much.
Kay
in Massachusetts