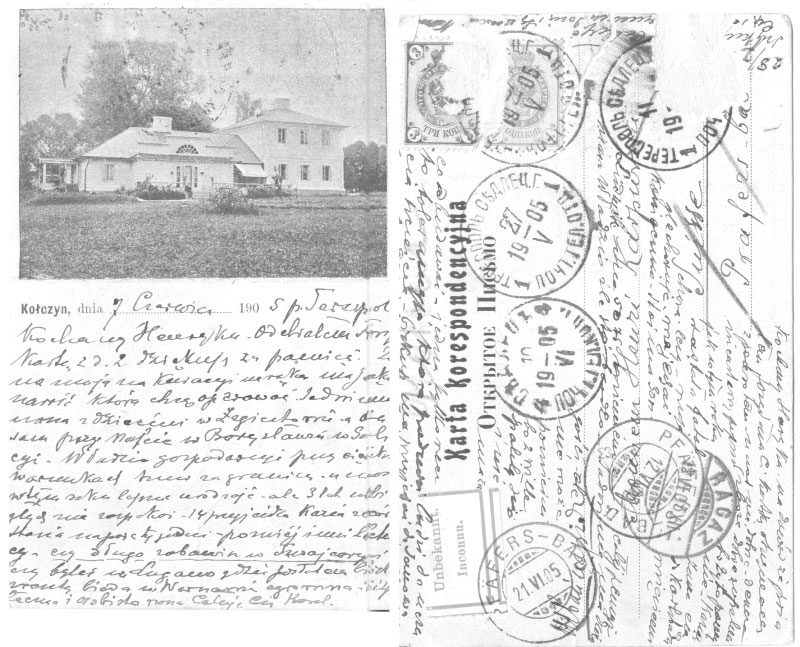 This postcard was received in 1905. It will be hard to read, let alone translate! Can anyone make out what it says? (It was pasted into a photo album with many other postcards. This is one of the few that could be removed without destroying the message!

I believe this is from either Ludwik or Carl Karpinski. It is probably from Carl, because we have an identified photo of Carl and his wife sitting on the steps of a house that looks like this one.

The card is datelined Kolcyzn. Is that a village? I believe, from another letter in English, that this estate is about 8 km from Terespol’s railroad station. Most of the estate was destroyed in WW I. The land was distributed among the peasants, and the owners were reduced to poverty by 1926.

This very interesting postcard from the Russian partition was received by a family in the USA in 1905. Can anyone read it?

It was probably sent by Ludwik or Karol Karpiński, the place of sending to Kolczyn (Kołczyn), is it a village? From other letters preserved in the USA, it can be assumed that it was an estate located approx. 8 kilometers from the Terespol railway station. Most of this property was destroyed during World War I, the land was parceled out among local farmers, and the property was finally liquidated in 1926.

We would like to thank P. Jim from the USA for sharing a scan of this next family memento with all of us, it is probably the only preserved photograph / postcard from Kołczyn, 1905.