A souvenir from life: with a gentle smile – “Authentic Autograph of Lenin” 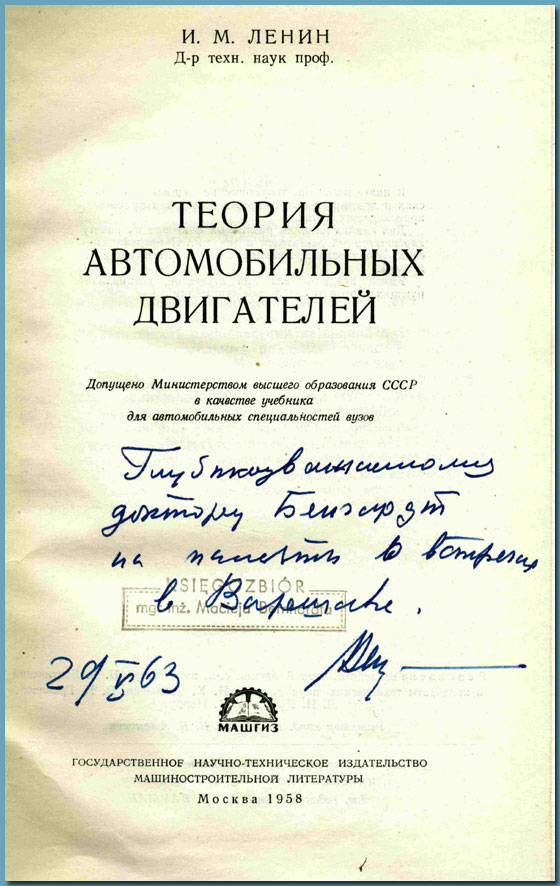 Late in the evening in May 1963, I received a call from Professor Jan Werner (Lodz University of Technology) with a shy but warm request. Despite quite a large difference in age and academic position (I was then the “deputy professor” – the Soviet equivalent between associate professor and associate professor), I worked closely with him and we were friends.

After the conference, the professor had an appointment the next day with his friend, a Soviet specialist in the same field, to visit Warsaw. Unfortunately, he is struck by the flu, he is lying with a high fever and is asking me to replace him. He claimed to be an excellent scientist and a good companion; he has known him for a long time and is very keen to keep in touch. If I agree, I will communicate with him immediately and will call me again and give me the address of the hotel in Warsaw where the guest lives.

I agreed; after a while, another phone call: “NN hotel, room no. xy, 10 o’clock, professor – name here,” slander “, which I do not remember – and surname:” Lenin “. I was speechless. “Yes, that’s his real name, a very kind and well-mannered gentleman.” “You probably have his perfect towel: Take it with you and ask for an autograph, he will be delighted.”

The next day (I think it was a Sunday) I showed up at the appointed time at the hotel. I found an elderly, modest gentleman who, after exchanging the usual courtesies, asked me: “which language suits you better: German, French, English or Italian. I don’t want to speak Russian in Warsaw. ” I chose French. He was a bit surprised, but immediately switched to French. He was fluent with a fairly good, but strange, accent.

We went to the Old Town, visited the Museum of Warsaw, the New Town. Finally, after a few hours, we landed at Fukier’s. He was an excellent storyteller. we talked for a long time about almost everything except technology and politics.

After lunch, I took the professor’s book out of my bag and asked for an autograph. He wrote me thanks for the meeting in Warsaw and said “I will add a comment when we leave”.

In the street, he looked around and added in an almost whisper: “My name is Lenin, that is good, an old Russian gentry surname; and the one with whom everyone associates it, appropriated it. ”In front of the hotel, saying goodbye to each other, we thanked each other for a very nice and interesting meeting.

Attached:
A photo of the first page of the textbook with a real autograph of the real Lenin – I send to share with visitors to the virtual GA.PA Gallery with a life’s gentle smile.