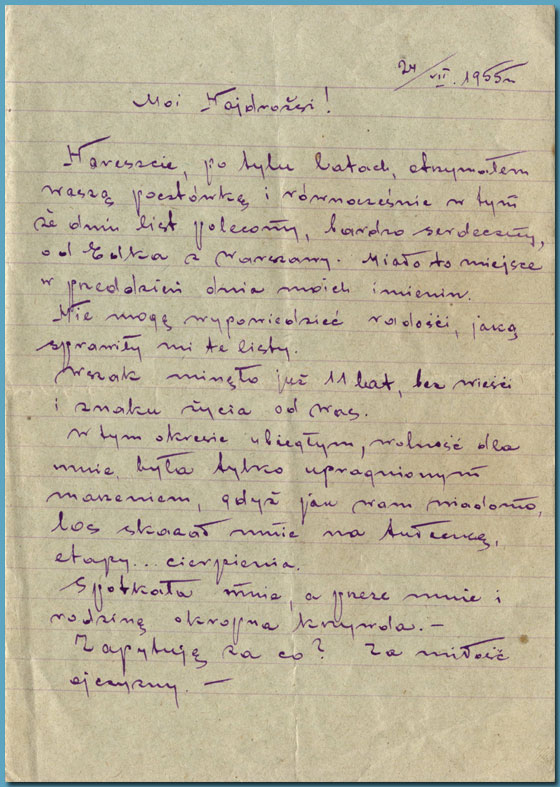 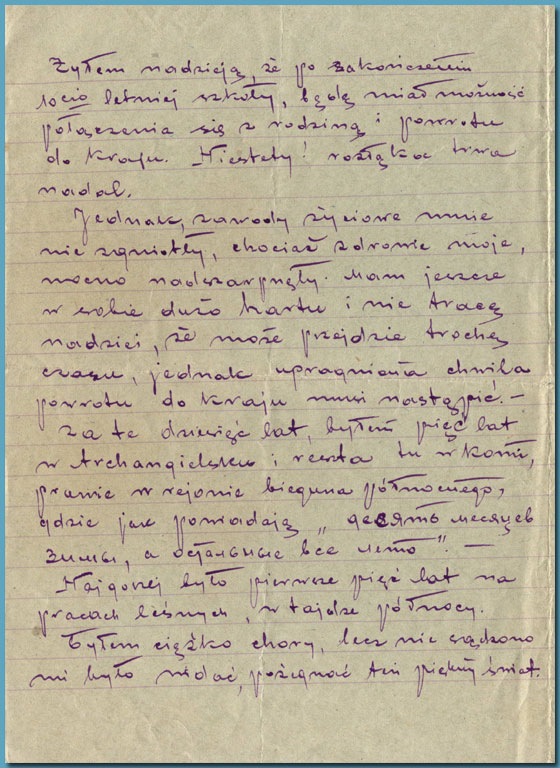 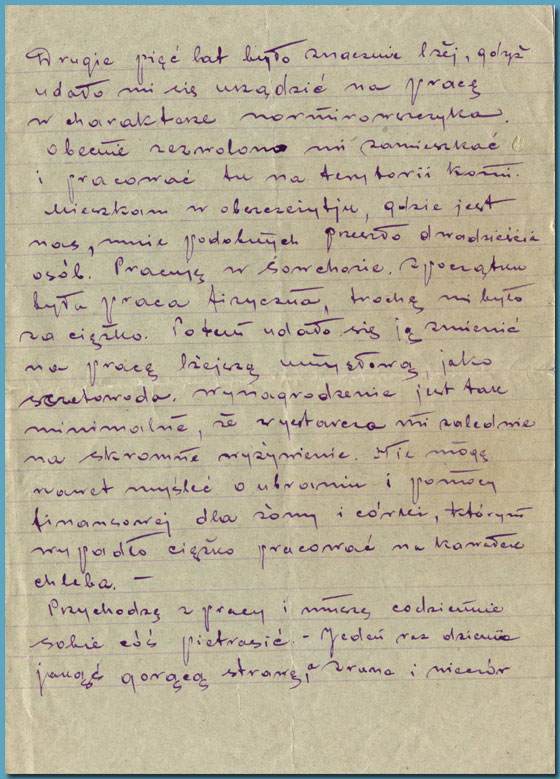 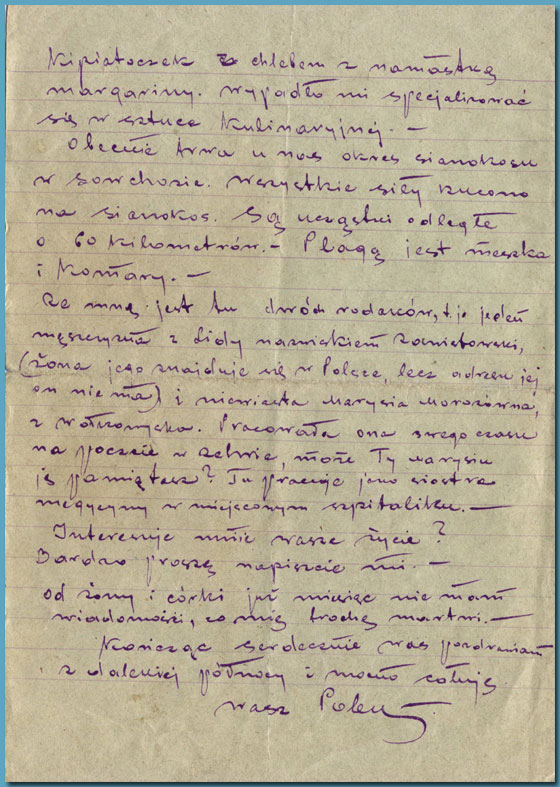 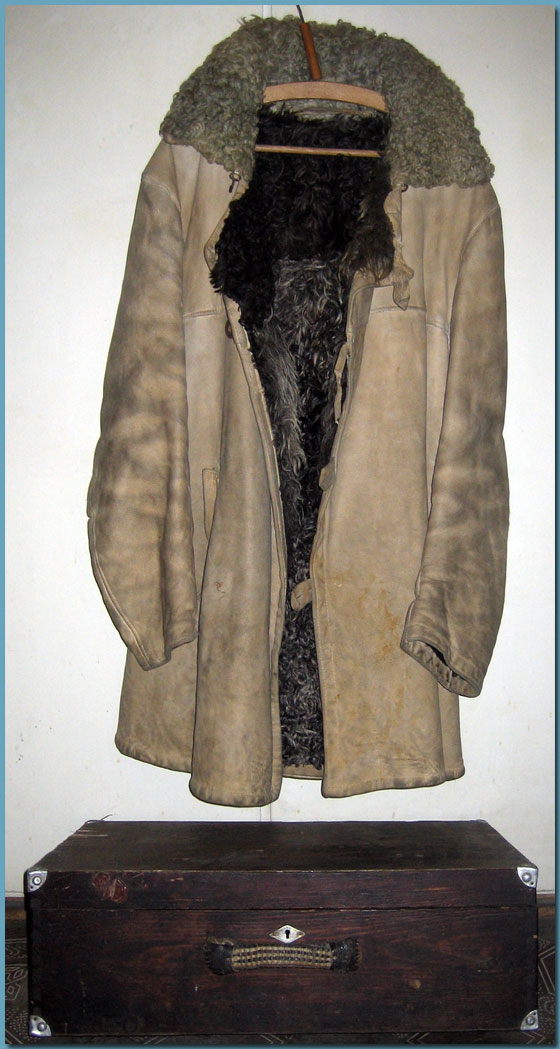 After the death of the last close person from my family from the generation of my Parents – my Aunt Maria Szewczyk nee Perskiewicz, born in 1916 in Krasnoyarsk (Russia), in her documents I found a letter that I consider a special testimony of Polish Fate, which in my opinion is worth keeping as unique souvenir, and post it in your virtual Museum of National Memorabilia.

The letter was written by my uncle – Apolinary Perskiewicz, born in 1908, who after the occupation of the former eastern Poland in 1944 – namely the town of Zelwa, near Wołkowysk – was arrested by the NKVD and sentenced to exile to the Gulag in near Vorkuta in the north of Russia.

After 14 years in Vorkuta, my uncle with difficulty, but managed to happily return to Poland in 1958, which I remember personally, because as a seven-year-old I was scared of a very emaciated figure of my uncle, whom I had never seen before.
My Polish uncle died in Warsaw in 1976.

Attached I am sending 2 JPG files showing the “unfolded” letter – that is why the first file contains the 4th and 1st pages, and the second file contains the 2nd and 3rd pages.
Although this letter is perfectly readable, I am diligently posting the following text (please note minor Russian linguistic accretions caused by years of staying with Russians and spelling imperfections – I tried to keep the original spelling):

Page 1
July 24, 1955
My Dear Ones!
At last, after so many years, I received your postcard and, at the same time, on that day a letter from Edek [ed. Apolinary’s brother, and my late Father] from Warsaw. It was on the eve of my name day.
I cannot express the joy these letters gave me.
After all, 11 years have passed, with no news and no sign of life from you.
In this last period, freedom was just a longed-for dream for me, because, as you know, fate condemned me to wandering, stages and suffering.
She met me, and I and my family hurt her. ” I’m asking for what? For the love of the motherland.

Page 2
I was hoping that after finishing 10 years of school [ed. an allusion to the period in exile], I will be able to reunite with my family and return to Poland. Unfortunately! The separation continues. However, the professions in life did not crush me, although my health was severely damaged. I still have a lot of fortitude in me and I do not lose hope that maybe some time will pass, but the longed-for moment of returning to the Country must come. as they say “ten months of winter, a ostalnyje wsjo ljeto” [ed. written in Russian: “ten months of winter and everything else is summer”]. – The first five years of forestry work in the northern taiga were the worst.

I was seriously ill, but I did not think I could say goodbye to this beautiful world.

Page 3
The second five years were much easier, because I managed to arrange a job as a Normirovsky. Currently [note 1955] I was allowed to live and work here in the territory of the Komi. I live in oblast [ed. Soviet housing standard: a barrack with single rooms for several people and a shared kitchen and toilet] where we, like me, are over twenty people. I work in Sowkhoz. At first it was manual work, it was a bit too hard for me. Later, it was changed into a lighter, mental job, as a shtetovoda [ed. calculator]. The salary is so minimal that it is enough for me only for a modest board. I can’t even think about the support and financial help for my wife and daughter [ed. after the arrest of Uncle, they remained in Zelva, who had to work hard for a piece of bread. I come from work and I have to worry about something every day – One hot meal a day, and in the morning and evening

Page 4
kipiatoczek [ed. boiling water] with bread with a margarine substitute. I had the opportunity to specialize in culinary art. –
Currently we have a period of haymaking in Sowkhoz. All the forces were put into the hay harvest. There are particles 60 kilometers away. – The scourge is a nap and mosquitoes . – There are two compatriots here with me, i.e. one man from Lida, whose name is Zawistowski (his wife is in Poland, but he does not have her address) and a woman, Marysia Morozna, from Wołkowysk. He used to work at the post office in Zelwa, maybe Ty Marysia [ed. Maria Szewczyk-Perskiewicz, sister of Apolinary and Edward] do you remember her? – They work here as a sister of megycin in a local hospital. –

I’m interested in your life?
Please feel free to write me.
From my wife and daughter [ed. wife Helena and daughter Jadwiga] I have no news for a month, which worries me a bit. To conclude, I cordially greet you from the far north and kiss you strongly, Polish women

I hope that, in your opinion, this one will also qualify the attached letter as a valuable document proving the fate of Poles over the course of the last century.

Hello! My name is Krzysztof Kajszczak, I was interested in a letter presented by you on the Internet concerning the Perskiewicz family (a letter from Apolinary Perskiewicz’s gulag) because my grandfather’s name is Stanisław Perskiewicz, he was born in 1913 in Zelwa, he lives to this day. There is a city of Zelwa here, so I was interested in whether there is any kinship with the people presented in the letter and with you, probably there is a high probability, the name is compatible and the city of Zelwa as well. We currently live with my grandfather in Wałcz, province. West Pomeranian Voivodeship.
Thank you in advance and e-mail me, maybe you know my grandfather?

In reference to my earlier e-mailed letter from my uncle Apolinary Perskiewicz, who sent it in 1955, I am in a hurry with an additional supplementary exhibit.
Well, as a result of the “inventory” that I carried out in my home, I found two commemorative exhibits related to the person of my uncle.
These are: the sheepskin coat in which my uncle Apollinary returned to Poland from Siberia, and a wooden suitcase made by him.
I would like to draw your attention to the trace of the wax seal on the front of the upper cover of the suitcase, on its left side. At that time, the relevant Soviet services, after carrying out an inspection, in this way – that is by sealing with sealing wax – protected the property of repatriated people against the possibility of packing any items past the owner of the luggage after the clearance, and from crossing the border with Poland.
I think that the attached photo will be an appropriate supplement to my uncle’s letter.
I want to add that in the near future I plan to transfer the exhibits presented in the photo to the Museum of Independence, located at Al. Solidarności 62 in Warsaw.