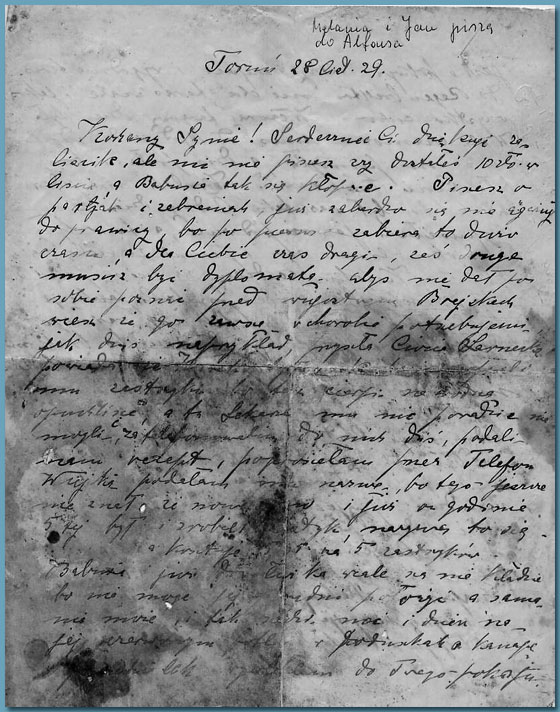 This exhibit is a letter from my grandparents to my father, who was 21 at the time and studied at the University of Poznań. I am sending a scan of the first page as well, and I have rewritten the whole thing for easier reading and understanding. How history repeats itself can be seen from this letter from 1929.

Beloved Son! Thank you for the note, but you don’t write to me if you got 10 bad. in the leaves, and babushka is so troubled. You write about parties and meetings, don’t get too involved with the right, because firstly it takes a lot of time, and for you it takes a long time, and the second you need to be a diplomat, so that you don’t make yourself known before the Brejski uncle, you know that he is always sick we need, as today, for example, the future aunt Sarnecka says that Kazik is sick … .. they gave him injections because he suffers from a watery swelling, and here the doctors could not advise him, and they called them today, gave us a prescription, I asked on my Uncle’s phone, I gave him the name, because he did not know it yet, that new…. and he was already at 5 o’clock and he had an injection, it is called ……. and it costs 5.65 for 5 injections. Babe doesn’t go to bed anymore because I can’t help her lie down and she can’t, and so she sits night and day on her red armchair in cushions and the sofa…. I dragged it to your room, there is more space in the room and it’s comfortable now. Yesterday the market day was Walichaniowna with us from 10 am to 3 am and she helped me a lot, and today I was washing it was Ciocia Łaskowa. The rabbit gave me one breath because it was such a nice day once and I let them out on the double, and there were wet leaves there, and probably he had eaten too much. Chanterelles carry 2 and 3 every day. On Tuesday or Wednesday I will send you a package, and if it is not so important for you, take it home, because I miss you very much. You write that you will have enough money, but I do not believe it, and write and we will send you after 1 hour. Write a nice long letter to the Doctors, just not about politics. what would you be discouraged, and they keep asking about you. Teras, stay with God, do not engage in too much, and accept it soon. Babusia talks about you and cries all the time. Sata wrote and Aunt Helena. You are warmly hugged by your mother and hugs from Babusia, and Daddy will write himself.

Dear my Alo! I am glad from your letter that young people are not rotting. Be careful on your part and do not get dragged by fanatical enthusiasts into some fights, because it could break your entire career and then the future. It is difficult to say here who is absolutely right. You must admit the Endecja has sinned a lot. Is it possible that the national elite, ie the intelligentsia, which…. The NGOs represent every, even the most innocent government order, regulation or regulation in its press, she brazenly and cynically criticized, throwing mud on government bodies, disliking the state system, i.e. the Government, and completely destroying its seriousness, persuading between the rows of its press to clearly disobey or rebel. Tell me! What does it smell like? Worse what will foreign countries, especially Germany say? How are these less enlightened and gray masses of people to act, who will be constantly threatened by the extreme, i.e. socialist class unions, the so-called International, and please do not forget the communists, i.e. the constantly threatening terrible scourge of Bolshevism. The day of the day is threatening this crowd, and so the malcontents because of unemployment and the price of constant confiscation…. against the government in magazines edited by the likes of Ossowski, Wojd .., Świniarski, Tempski, etc. Does not this example have to push him over time to a clear opposition to everything that is governmental. The opposition of the gray crowd, unfortunately, does not end with a stupid polemic of a couple of female writers paid in court and a relative packing of a few so-called … .. only and especially in each newspaper for sitting in prison agreed, only the people, when they strike with their elemental force the tools of the country’s administration, they will immediately destroy and ignite the torch of revolution or fratricidal struggle, which today, in my opinion, would be the last partition of our country with such heavy victims of the regained Motherland. In dobias res dewede i napera (I do not remember exactly) Wlom … .. So I would never advise you to be a declared nationalist, because as I showed you above, you could contribute to pushing us against the Government, which is worse than a clear betrayal of the country. As easy as it is by deliberate agitation to unleash the low instincts of the unconscious masses, so is it difficult to tame them again. In such cases, monumental cataclysms of entire nations are inevitable. I am not refusing you, my only one, of a healthy opinion, but as your older and natural mentor, I am asking you to always be moderate in politics, he later had an independent position.
It is easiest to find enemies in politics or in a religious dispute. So don’t get mixed up and never get involved in writing, because no one knows what will stand and what will not. Keep yourself clean papers, everyone needs them, namely in your profession, where even it is not excluded, you can later choose a position under a certain party, and having the papers torn would be difficult for you. Today Zakorski from Bronia was with me. Zak will send me my diploma from the Radzyński Circle as the first honorary member for merits for the development of Polish agriculture in German times in my district. Just write! Strong fatherly hugs

Note: When rewriting, I tried to keep the old style and spelling, so there were some errors and differences from the spelling used today. Some of the errors may have arisen because of difficulties in reading the manuscript.