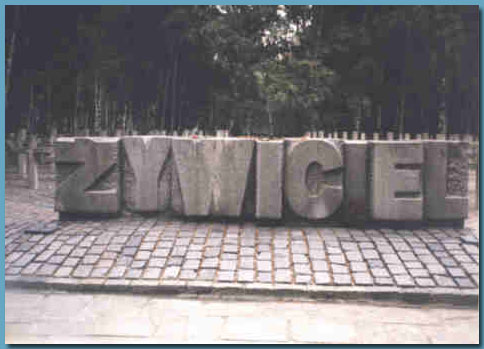 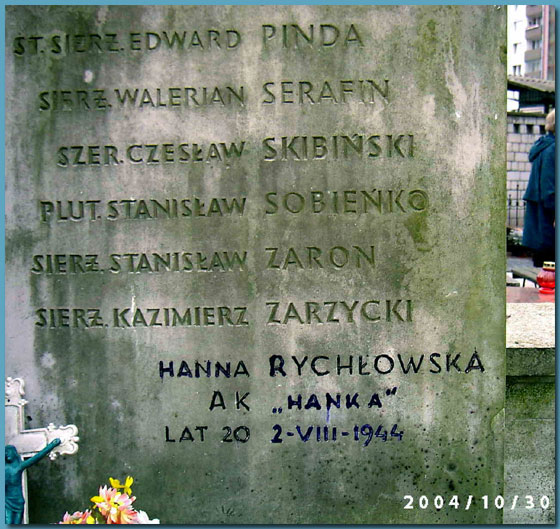 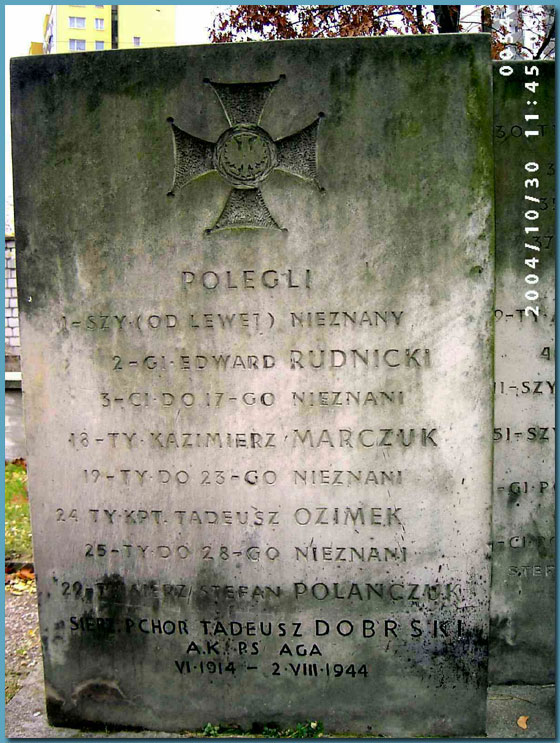 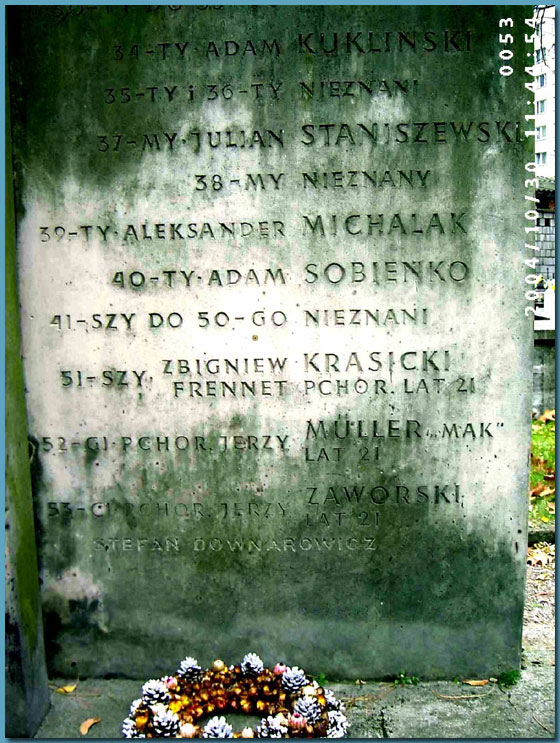 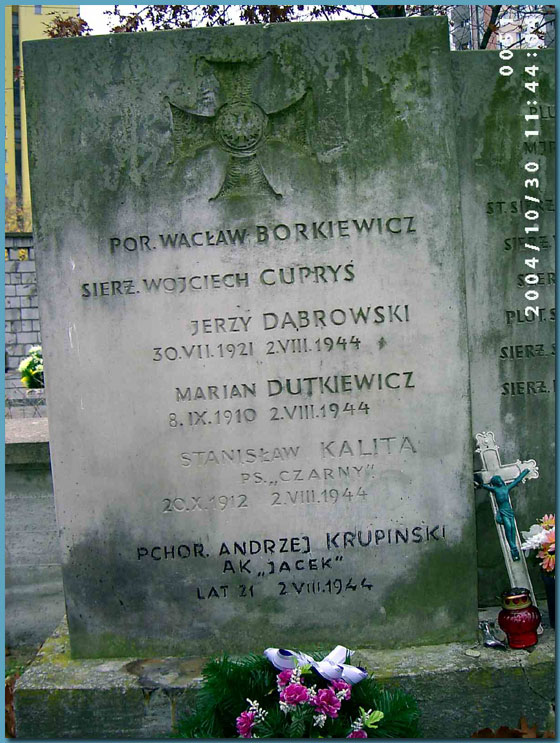 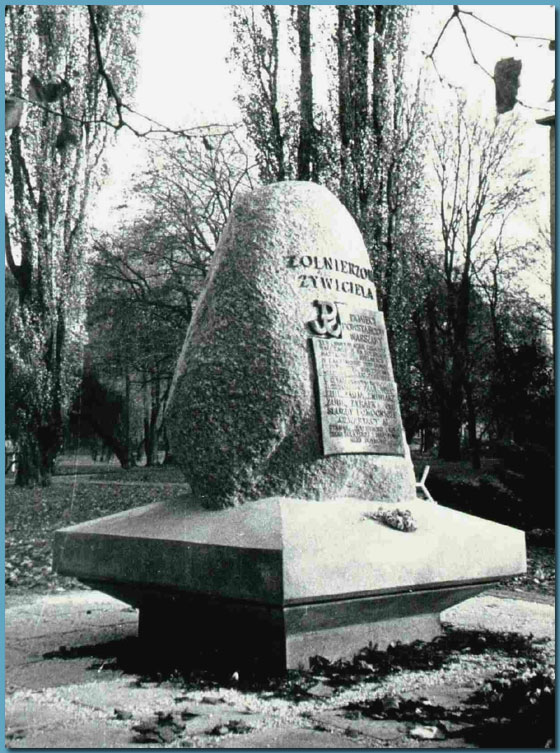 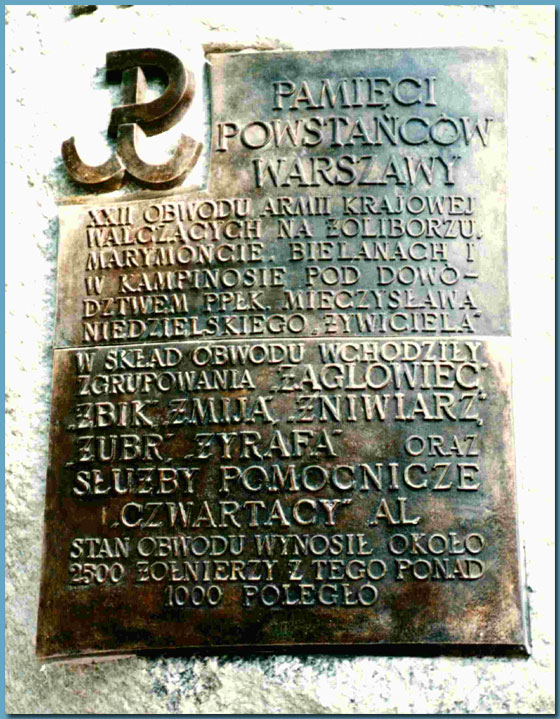 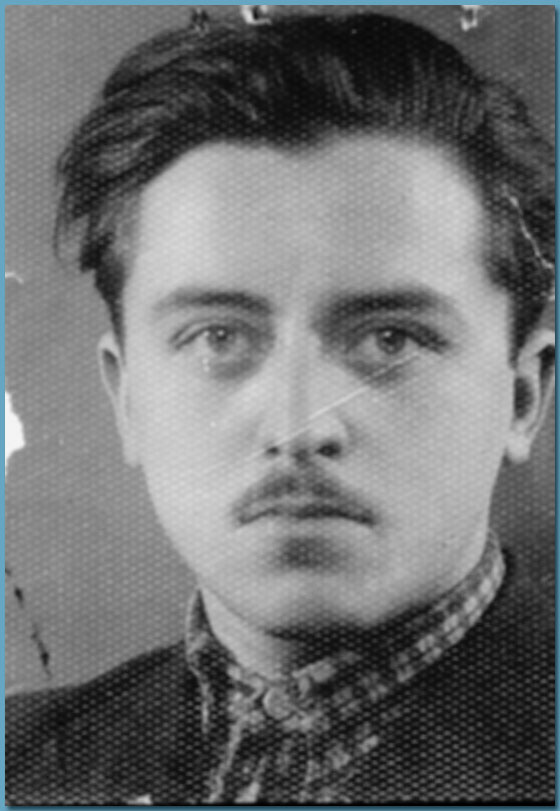 For a long time, the soldiers of the insurgent District “Żywiciel” have repeatedly initiated the initiative of erecting a monument commemorating our fallen colleagues and comrades-in-arms. We faced various “objective difficulties” both from the lack of the necessary funds and from the bureaucracy of the time. After numerous trials and obstacles, which I cannot even partially describe, the monument, thanks to the dedicated work of many people and the political thaw, was erected between Słowackiego and Popiełuszko Streets, in the square behind the Komedia Theater, and on October 15, 1988, it was officially unveiled.

The design of the monument – very modest – was prepared by one of our colleagues, the construction of the foundation and base – “after acquaintances” – the second, a bronze plaque with an inscription listing the District Groups (battalions), the number of insurgents and the number of fallen, was arranged by a third in a friendly facility. Transport of building materials – the fourth. There is still the problem of “arranging” the crane, which will lift a large boulder (approx. 3 tons) and set it on a pedestal. This boulder was given to us and brought (if I remember correctly – somewhere in Olsztyn) to the place where the monument was to be erected, a construction entrepreneur who was too young to take part in the Uprising, but was very kind to our initiative.

There is an event connected with the construction of the monument: a minor one, but very characteristic of the relationship in the 1980s. At that time, I had a suitable car crane “at hand”. Such a crane was approved by the Motor Transport Institute, of which I had been the director for about a year. Using it for any tasks beyond approval was unacceptable, not only for formal but also substantive reasons.

I presented the problem to a few trusted employees whose views were well known to me, talked to the trade union, and on the agreed day, the crane and service were in the right place at the right time. There was also a large group of people who were to participate in pouring concrete into a previously made plinth, necessary bricklaying works, etc.

One of my friends also arranged a pear to transport concrete. Pear went to a concrete factory somewhere in the suburbs of Warsaw and … died. The agreed deadline has passed, we are waiting 10, 15 minutes, half an hour, three quarters of an hour. People are nervous because they broke up from work, “my” crane should also be returning by now. The possible re-gathering of all the necessary participants and equipment is almost a miracle task.

Finally, a pear with cement appears, almost an hour late. There was a greeting bouquet, but it was definitely not flowers. Here is the driver-operator explanation.

I went as it was agreed, they quickly loaded me with cement and when leaving at the gate, the employee asks who is the cement for ?. When he found out that he was at the insurgents’ monument, he called somewhere and told me. This should have been said before. Come back quickly and throw that cement away, they’ll show you where. You will get another one. Just keep an eye on him overnight, how well he binds; they won’t even pull out your boulder with a tank.

Here is a small explanation for those who (fortunately) do not remember those times: More similar monuments were erected earlier in Warsaw; but “unknown perpetrators” destroyed some of them during the night.

PS I do not mention the surnames of the participants here, because I do not remember most of them; at the same time, the terms of those who “dealt with” individual matters: “one”, “the other” etc. are purely contractual and each concerns many of our colleagues and supporters of our cause.