A personal keepsake, a short story “Adventure in El Paso” autographed by the author, Marek Nowakowski 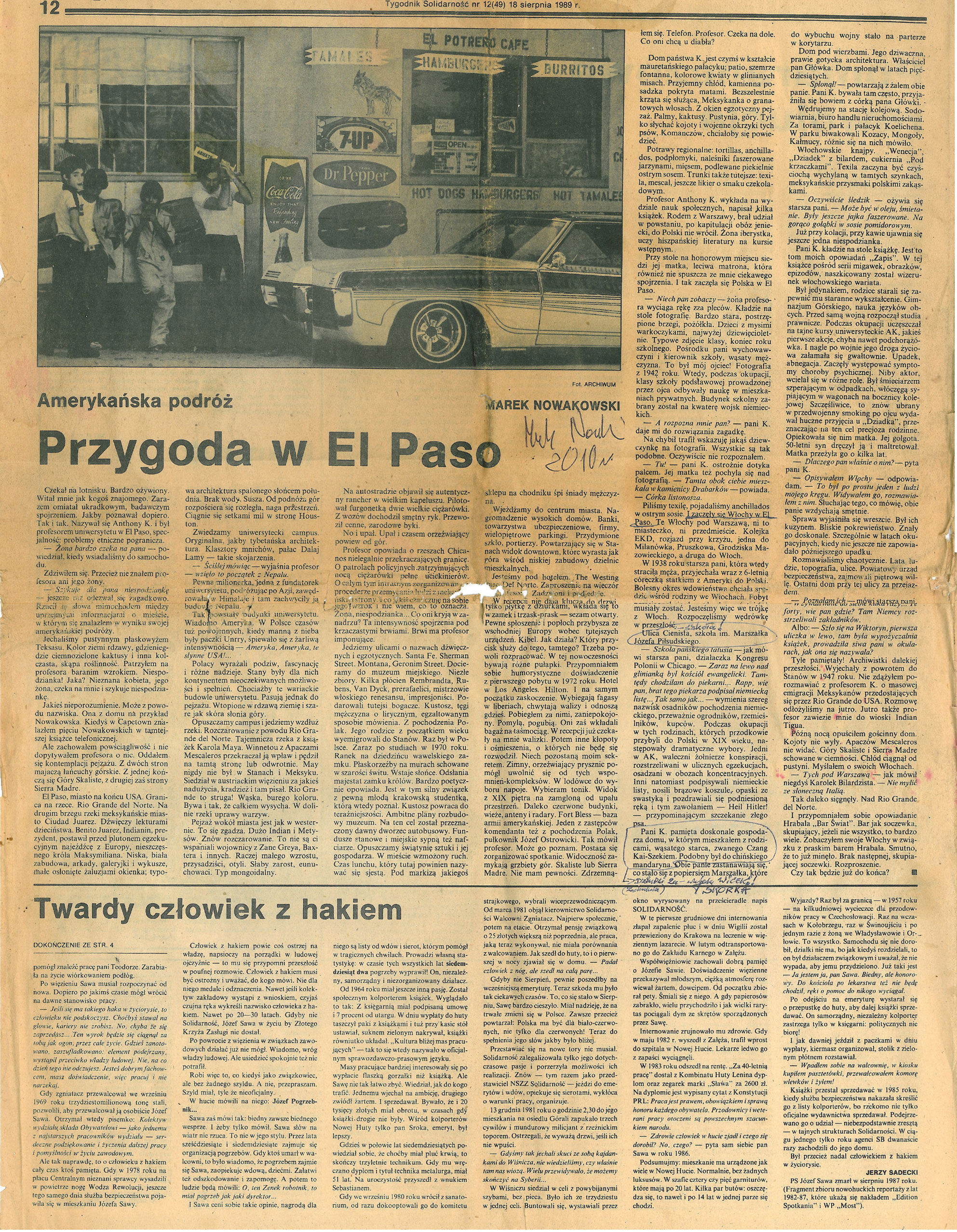 Marek Nowakowski’s short story “Adventure in El Paso” with the autograph of the author of unusual books, including “Afterimages” (2010)

“American Journey, Adventure in El Paso” writer Marek Nowakowski – Tygodnik Solidarność 12 from August 18, 1989 – with the author’s autograph. It is a little-known story and a touching souvenir, because it shows Polish traces scattered all over the planet – this time in the USA, where pre-war memories of people from the local Polish diaspora return to Poland, to Italy near Warsaw.

Let the motto of these memories be a touching, last fragment:

“And I remembered Hrabal’s short story“ Bar Świat ”. A bar like a lens, focusing, if not all, a lot. I saw my Italy in connection with Hrabal’s Prague bar. Sad that this has already passed. No other focusing lens. Dispersion. Will it be like this until the end? ”

MAREK NOWAKOWSKI, one of the greatest Polish writers of the 20th century. An artist who bends with remarkable sensitivity over each person and their fate, thoroughly describing reality, an independent and steadfast writer, showing how valuable is the memory of others and his small homelands.

Tadeusz, a friend from home, Włochy near Warsaw, where, in the 1950s, Marek Nowakowski, young, starting his literary work, lived with his parents (Dad Antoni Nowakowski was the headmaster of a local school in Włochy).

This house in Italy, in the pre-war period, was built together by aunt Eugenia Maternicka – a long-time head of the correspondence department at the Gebethner and Wolfa publishing house in Warsaw, one of the first Emancipants in Poland, and uncle Wincenty Skorka, who spent many years of his life in Manchuria building the Trans-Siberian Railway , after returning to Poland to Italy near Warsaw, he propagated his new religion, Buddhism.

This pre-war house is mentioned in a story by Marek Nowakowski, I am sending the appropriate fragment for our collective imagination game, does each house not have its history and secrets ?:

“Mrs. K. remembers well the owner of the house where I lived with my parents, a mustachioed old man called Chiang Kai-Shek. It was similar to the Chinese Mandarin. Both ladies are wondering what happened to the Marshal’s bust, which stood on the ground floor in the corridor until the outbreak of the war. “